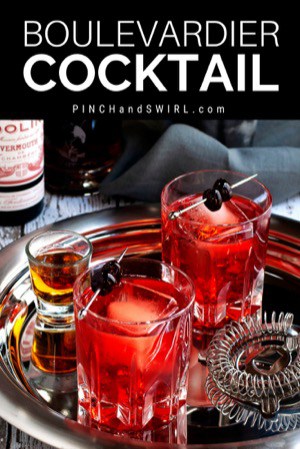 On a recent trip to Seattle, a friend introduced us to something new, two things actually: giant ice cubes and the Boulevardier Cocktail. A giant ice cube melts much slower than its dice-size counterparts, keeping your drink cold longer without watering it down. The Boulevardier is a riff on a classic Negroni, swapping whiskey for gin.

Classic Negronis are made with a simple 1:1:1 ratio of gin, Campari and sweet vermouth and I'll never forget how we came to love them.

We arrived in Venice, Italy with suitcases full of long sleeve shirts, sweaters and jeans; it was September after all. But the weather had other plans - heat and humidity that demanded shorts, sandals and t-shirts. It was during that first week of our trip that we discovered both the Negroni and the Campari Spritz (or Aperol Spritz). In the late afternoon (and sometimes not so late), you would find us at a table outside, people watching and sipping one of these refreshing cocktails. Okay, sometimes we had beer, but you get the idea. 😉

At home, on a hot summer evening that calls for a cocktail, you're most likely to find us sipping a Peach Bellini (Venice, Italy's, Harry's Bar made it famous!), the Ultimate Gin and Tonic or a French 75 Cocktail. But we liked these cocktails well enough to add them to the rotation.  I thought we had a full drink repertoire, but this Boulevardier cocktail recipe is a worthy addition. It's just as refreshing as the Negroni, but a little less bitter - smooth, balanced.

An American-born writer, Erskine Gwynne, is credited as the creator of the Boulevardier Cocktail, named after the monthly magazine he wrote in Paris during the late 1920's and early 1930's called (you guessed it) Boulevardier. Instead of the gin you'll find in a Negroni, whiskey (bourbon or rye) is the primary ingredient in the Boulevardier.

The definition of boulevardier, according to Merriam-Webster is: a frequenter of the Parisian boulevards; broadly : man-about-town. That sounds about right. And, if you're wondering, it's pronounced: "bool-ah-vard-ee-ayy"

How to Make a Boulevardier Cocktail

Many recipes call for 1 ounce of whiskey, which coincides with the classic Negroni ratio, but I agree with Michael Ruhlman that 1.5 ounces of whiskey makes a tastier cocktail. For a single cocktails combine 1.5 ounces of whiskey, 1 once Campari, and 1 ounce sweet vermouth. Serve over ice (ideally over a giant ice cube) Some add a lemon twist, which is perfectly delicious, but I prefer a high quality maraschino cherry (or two). 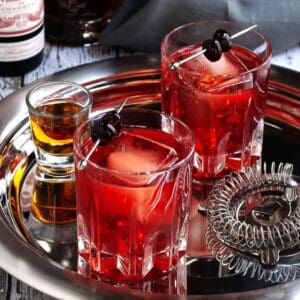 Calories: 205kcalCarbohydrates: 9gProtein: 1gPotassium: 1mgSugar: 1gIron: 1mg
Tried this recipe?I'd love to see it! Tag me on Instagram at @pinchandswirl or leave me a comment and rating below.
« Kale, Kohlrabi and Mint Stir Fry with Bacon and Fried Egg
Natural Baby Food (a book review) + Steamed Cherry Puree for Babies »