These are not your average Shrimp Tacos. Imagine lightly charred corn tortillas cradling tender shrimp with a crisp salt and pepper crust, topped with crunchy cabbage and radish slaw then finished with creamy spicy shrimp taco sauce, a scatter of fresh cilantro and a squeeze of lime juice. So easy too. You can make them start to finish in 30 minutes, easy enough for a weeknight dinner!

For the past year, I've been working on perfecting this spicy shrimp taco recipe. I've made them a dozen times and this one is IT.

There was a full moon the other night and, well, I think Brandi Carlile says it best in Hard Way Home:

Yes, that about sums it up.

When I wasn't thinking about: work, family, coffee, the concept of eternity, pulling weeds, what was that guy's name?..., I was conjuring these tacos. So insomnia isn't all bad.

“I need a new strategy for Shrimp Tacos,” I thought, “maybe a crunchy green cabbage and radish coleslaw and creamy spicy shrimp taco sauce. And what if the shrimp had a crisp salt and pepper crust (a riff on these Salt and Pepper Shrimp - not your average shrimp recipe, I promise.)?”

I’ll tell you what, these are literally the best shrimp tacos I have ever tasted. And they’re easy enough for a busy weeknight (watch the video if you want me to prove it 😉). A great way to mix up Taco Tuesday or to try instead of your favorite fish tacos.

A couple of notes: I love to make these with corn tortillas, but flour tortillas work just fine if that's what you have on hand. And be sure to use a high heat oil for frying the shrimp. Olive oil has a lower smoke point and you want the oil to be very hot so the shrimp get a nice, crisp coating.

The crisp shrimp are essential to these tacos, but so is the sauce. Shrimp Taco Sauce sounds so official, but it's actually really simple and made with things that I bet you have in your refrigerator right now. It's just three ingredients: mayonnaise, sour cream and sriracha sauce, but it brings the textures together in these shrimp tacos and makes all of the other flavors shine!

How to Peel and Devein Raw Shrimp

For shrimp tacos, you'll want to completely peel and devein the shrimp. No one wants to bite into a shrimp tail!

To peel raw shrimp, first gently twist off the head (if still attached) then wedge your thumb inside the shell, just above the legs. Grasp the shell between your thumb and forefinger; lift and turn to detach the shell down to the tail segment. For shrimp with the tail intact, hold the peeled shrimp near the tail and gently pull to release the shrimp completely. (Skip this step for recipes where you want to leave the tail intact.)

To devein, use a sharp paring knife to cut a shallow slit down the center of the back. With the tip of the knife, gently lift the vein out and discard (wipe onto a paper towel). Repeat with remaining shrimp.

What to Serve with Shrimp Tacos

Though these are a meal on their own, they would be great alongside Homemade Refried Beans and tortilla chips with Pico de Gallo and Salsa Guacamole for dipping.

For a 30 minute, summertime version of these check out Grilled Shrimp Tacos.

How to Make Shrimp Tacos

Step 1: Finely chop cabbage and radishes (and fresh cilantro if desired). Set aside.

Step 3: Lightly char both sides of each corn tortilla in a hot cast iron skillet and transfer to a packet of aluminum foil to keep warm.

Step 5: Fry shrimp in hot oil (nearly smoking) in a large wok or skillet until pink. Add salt, pepper and fresh garlic to shrimp; toss until coated and fragrant. Transfer shrimp to a plate.

Step 6: Assemble tacos one at a time, topping each tortilla with shrimp, cabbage, radishes and cilantro (optional). Drizzle with shrimp taco sauce and add a squeeze of lime (optional). Enjoy! 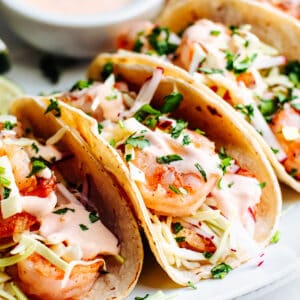