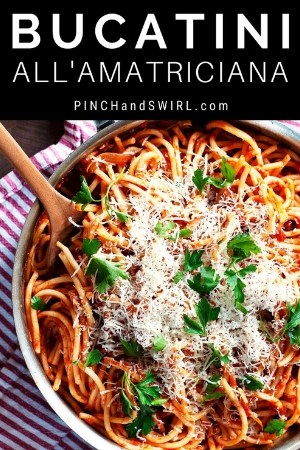 Make classic Bucatini all'Amatriciana with this simple recipe and you'll have dinner on the table in less than half an hour! A simple combination of tender bucatini noodles, spicy tomato sauce, pancetta and Pecorino Romano cheese, it's likely to become one of your favorite busy day meals!

Where did Amatriciana Sauce come from?

Though this dish originated in the town of Amatrice, where it was made with spaghetti noodles, now it's popular all over Italy. The use of bucatini pasta began in Rome and is now the more prevalent pasta choice. Amatriciana sauce was also originally made with guanciale (cured pork cheek or pork jowl), which can be difficult to find in the United States. Pancetta (or Homemade Pancetta) stands in nicely.

I first tried Bucatini all’Amatriciana (my first Pasta Aglio e Olio too) at Trinacria, a tiny Italian restaurant in Olympia, Washington. It’s the kind of place that you could mistake for a dive: lettuce green walls and neon lights, rickety chairs and inexpensive wine. But it’s iconic in Olympia, well known for fantastic food, curt service (Enjoying the music one evening, Keith and I asked our server what it was. Her quick reply, “Annoying.” We liked her immediately.) and the friendly but quirky first generation Italian owner, Eugenio.

Despite living in the United States for decades, Eugenio spoke with a strong accent. I once asked him about the ingredients in his Amatriciana sauce, his reply, “Oh yes, yes…I start with…and then…” As he rattled off the ingredients and preparation, his accent became mysteriously stronger, as though he didn’t really want to share his secrets.

So I decided to figure it out on my own and after a few tries, I had it.

Do not be alarmed when you see the short ingredient list and simple instructions, thinking that something so easy can’t be spectacularly good. I promise it is. In fact, I predict it will become a go-to pasta dish.

What pasta is similar to bucatini?

Bucatini is thin and long like spaghetti, but has a hollow center. If you can't find bucatini, spaghetti is a great substitute.

Why use whole canned tomatoes instead of diced or crushed tomatoes?

Whole tomatoes tend to cook down more quickly than crushed or diced tomatoes. But crushing them in the pan can be a messy process. An easy answer is to cut the whole tomatoes into smaller pieces right in the can using kitchen shears (pictured below). 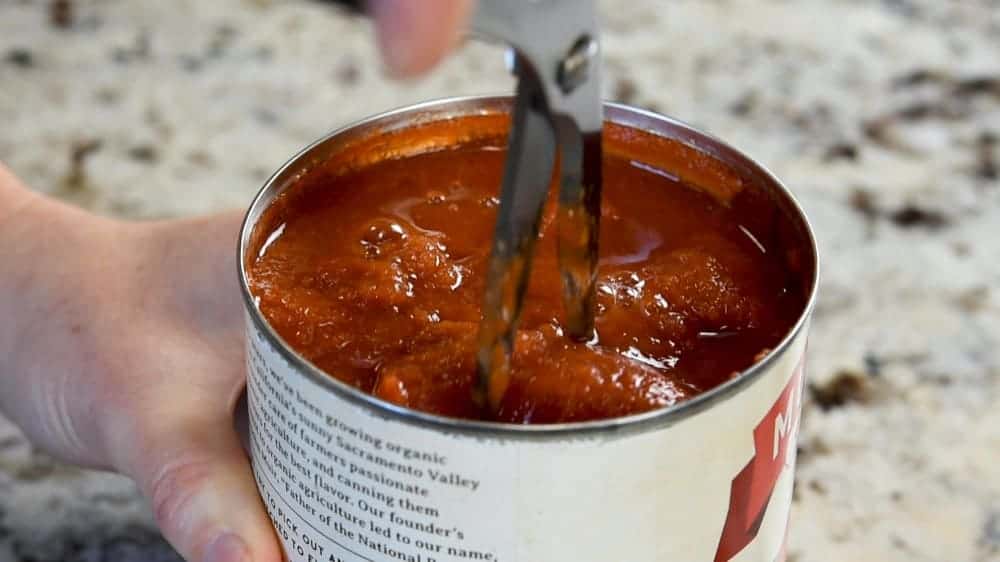 How to Plate Bucatini all'Amatriciana

It's fun to give your pasta a twirl before plating it. See the recipe video for exactly how to do it with a carving fork and large serving spoon.

How to make Bucatini all'Amatriciana

Step 1: Brown pancetta in a large skillet; remove with slotted spoon and pour off most of the fat. 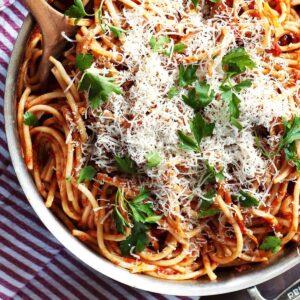 Marissa Stevens
This is great the next day, if you happen to have leftovers. The sauce tends to soak into the pasta over night so you'll want to add a little water when you reheat it. I like to add a little olive oil, salt and pepper too.
4.80 from 10 votes
Save Recipe Saved! Print Recipe Pin Recipe
Prep Time 10 mins
Cook Time 20 mins
Total Time 30 mins
Course Main Course
Cuisine Italian
Servings 6 people
Calories 754 kcal