What does it take to move from ultra-urban Menlo Park and Santa Clara, California to start a pig ranch in the high desert of Central Oregon? 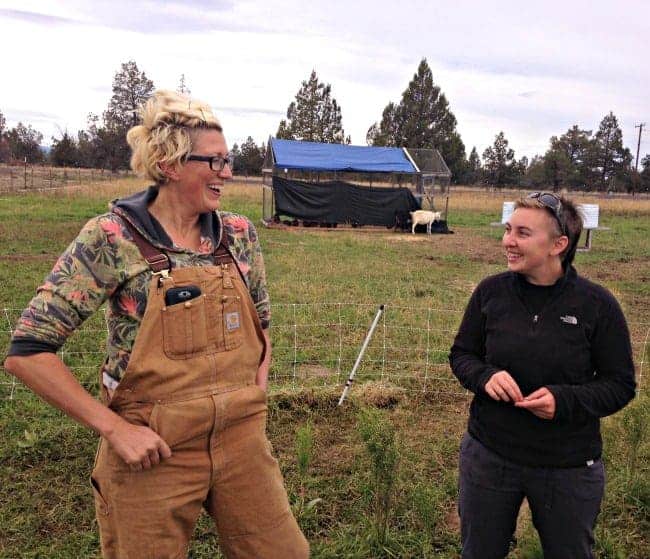 In February 2014, less than a year ago, Krista and Sonia hitched a trailer to their Toyota Tacoma and left California. Their plan included stops in Oregon and Washington to pick up pigs, turkeys, rabbits and their new Malamute.

That day, Sonia recalls, “We picked up 3 pigs, tried getting turkeys but the lady couldn’t catch them, …9 rabbits, …and had gone to the Portland airport to pick up our Malamute. There was no room in the truck so we had to put her in the back and she was howling.”

“We had a circus on wheels,” laughs Krista.

Dog howling, rabbit cages stacked in the truck bed, and 3 pigs together weighing more than 1,000 pounds shifting around in the trailer, they set out to cross Mt. Hood. Near the top of the pass amidst the fog, darkness and rain their GPS instructed, “Make a U-Turn at Blowout Road.”

But a U-turn wasn’t an option for these two. And 10 months later, Sonia and Krista have a working ranch and coffee roasting business: Gunpowder Ranch and Gunpowder Roasting (update Feb. 2019: now in Ashland, Oregon – Uproot Meats). 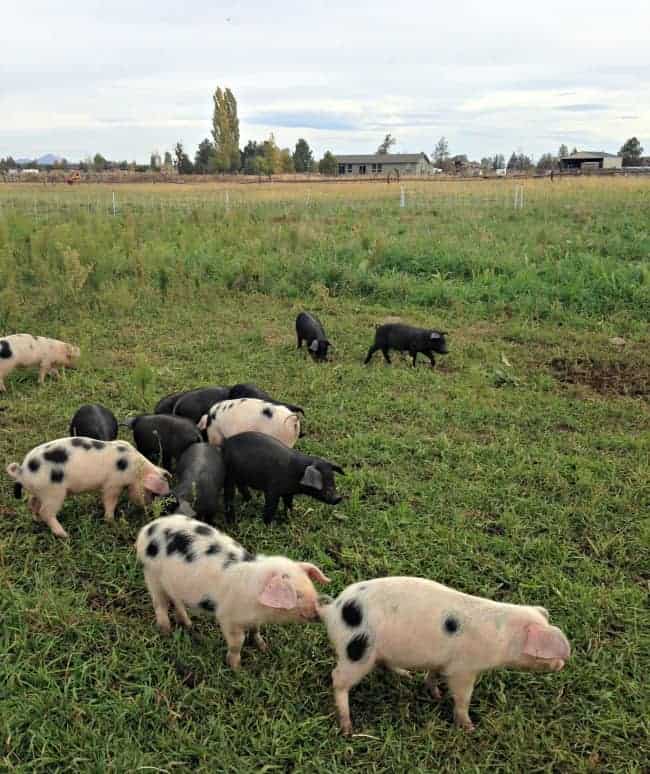 Krista explains, “About a year ago, Sonia was grinding coffee while coming up with a name for our Coffee Roasting business when she envisioned the pile of coffee grounds resembling gunpowder – the symbolism of a powerful moving forward action and the lasting impression it creates. When we moved to Central Oregon it just fit.”

Krista and Sonia met five years ago in a math class at De Anza College in Cupertino, California. Together they attended environmental justice courses and studied environmental conservation in Belize. Sonia is also a culinary school graduate, but decided not to pursue a restaurant career. “A chef yelled at me and that was it,” she laughs.

It was floating down the Deschutes River near The Old Mill that they fell in love with Bend. “Everyone was on the river that day and was so genuine and fun,” Sonia recalls, “then we looked on Yelp for a place to eat and that led us to 900 Wall, which kind of sealed the deal.”

Gunpowder Ranch stretches across 9-acres of historic land, once a horse ranch that included one of the area’s first dairies. Their land, and that of their neighbor’s were the original town of Tumalo, Oregon.

Sonia and Krista live in what was a fixer-upper rental home on the property with their Golden Retriever, Ayo and their Malamute, Aether. 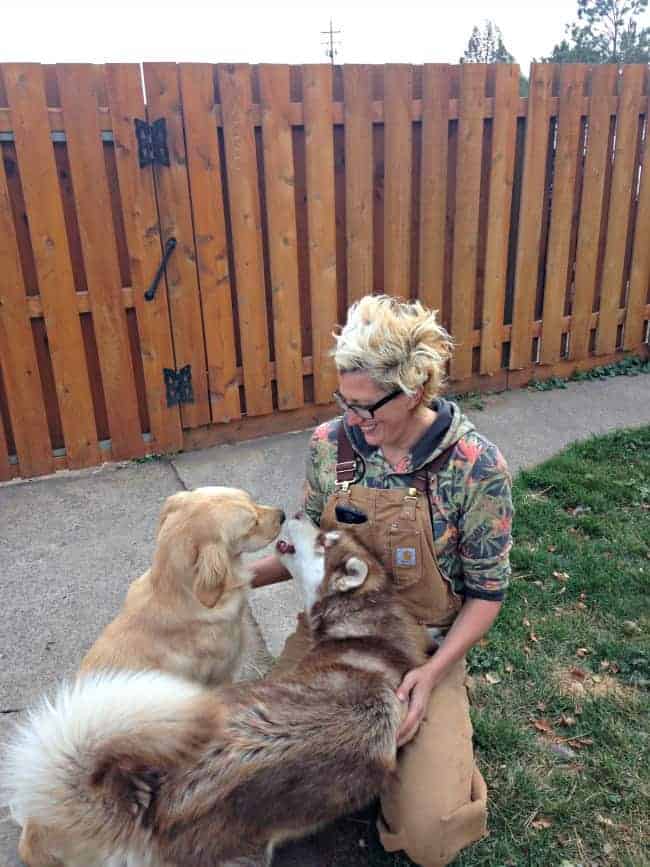 Krista with Ayo and Aether.

In just 10 months they’ve transformed their land: knocking down an old dairy building, fencing in several acres for their planned fruit and nut orchard, and constructing a large irrigation pond and coffee roasting building. They’ve also raised and processed one drift of pigs, and sold the meat at Central Oregon Locavore and the North West Crossing farmer’s market.

Their objectives for the ranch too have evolved, choosing not to raise rabbits, but adding several goats to their list of animal residents – among them Billy and Molly. They plan to eventually sell raw goat’s milk. Beyond typical pork cuts and pork shares, Sonia intends to create charcuterie: salami, pancetta and prosciutto. “We already have legs,” says Sonia, “I don’t know how we’re going to hang them for a year, but we’re going to figure that out.” They also sell fresh eggs from their pastured chickens and offer full service pet boarding.

“I feel like we’ve had a gentle introduction,” says Krista, “things have gone well.” But that doesn’t mean there haven’t been challenges. Learning to clip the piglets teeth, for example – ‘like little fingernails’ – to protect the sows from shredded nipples. And having to castrate the males to prevent tainted meat, a task ideally done in the first week after they’re born, before nerve endings develop.

“We snip balls,” laughs Krista. “Coming from a busy whirlwind of city lights and traffic with all this sensory overload to landing in the capital of God’s country has been a journey. The lifestyle of snipping pig balls (which Sonia does quite flawlessly) and our adaptation to this sometimes equally intense polar lifestyle is so surreal. My experience to this farm living and all the guts and glory has been like coming home. One of our first Central Oregon experiences was picking up our first herd of Tamworth pigs. A livestock Veteranarian met us out on the Prineville farm to show us, hands on, how to castrate pigs. Surreal, indeed.”

Krista’s mother, and her sister and family have recently moved to the area to help out. “We’ve had a lot of support from neighbors and family,”  Krista says. “Other farmers grew up on pig farms, we don’t have that. We’re from the concrete jungle of the Bay Area. But I definitely have the heart and the pigs have me.”

It’s impressive what Krista and Sonia have accomplished in less than a year, but it begs the question, “Why are you doing this?”

“We’re raising [the animals] responsibly…with the mass production that has happened: abusing the animals, one; two, the way that they’re being fed, it transfers into our systems. It make us sick, makes the animals sick,” explains Sonia. “Rotation is a huge thing.” The couple regularly rotate the animals away from their own waste and on to fresh pasture. The’ve also chosen to allow the pigs to breed naturally rather than by artificial insemination. 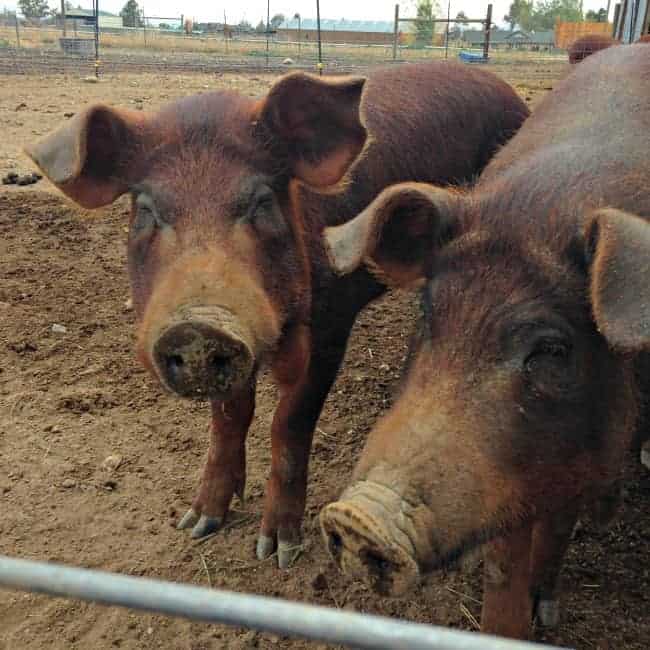 Gunpowder is a biodynamic ranch, nurturing plant growth without the use of pesticides and only buying feed that is organic and non-GMO. The USDA inspector who visited the ranch squelched their initial plan to be USDA certified organic with his estimate that building the USDA infrastructure would cost at least $500,000. And that hiring USDA health inspectors to work full time at the facility would be another $500,000.

What about the scale of the farm, I ask, do you plan to expand it?

“I don’t really want it bigger,” says Sonia, “I think we would lose track of our quality.” 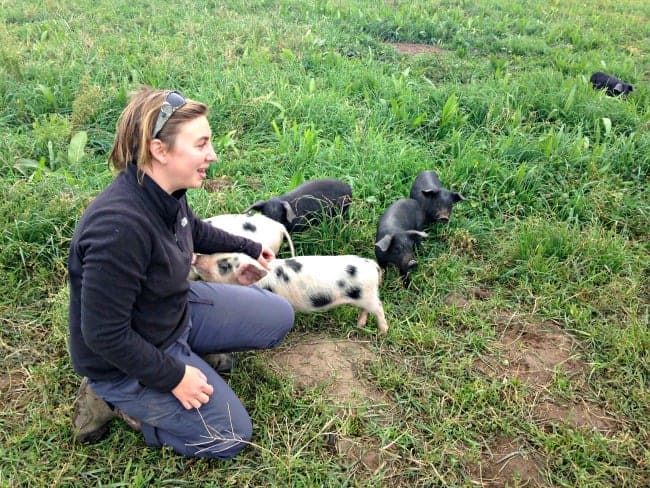 And what about the pigs, how do you make peace with raising them for meat?

“We don’t name them,” Sonia replies.

These pigs are content: they chomp, root, rub and roll. But they’re not pets. Their existence is an exchange: life for livelihood.

With their first round of slaughter, Sonia and Krista used the USDA facility, but now work with a local butcher to process the pigs at the ranch.

“Processing here on the farm, I feel a lot better. At the USDA processing facility, we feel like just a number, just a piece of meat,” says Krista.

The first drift of pigs were not born on the ranch and were initially aggressive to one another and afraid of Krista and Sonia. “They warmed up to us,” Krista says, “it just took a while to melt away their meanness.” The piglets on the farm now run to them and love to have their ears scratched.

How do you cope with it, I ask Krista.

“It’s been a process, honestly. And this is our first round watching the pigs from birth to end.”

On the day of slaughter, “I have to walk away and say a prayer and say ‘thank you’. I have a strong spiritual connection. It’s intense, definitely, I’m not going to lie.”

What about the future of the ranch, do you want to increase your distribution to local markets and butchers?

“Yes, but it’s not my ideal. I want to get that connection of people coming here and having a relationship with their pigs.”

Sonia and Krista may not have the history or the innate knowledge that comes of growing up on a ranch. But they come to ranching with intent and with passion. If you believe that’s the stuff of success, then these two are just getting started.

Audio clips from Keith’s and my visit to Gunpowder Ranch:

A Circus on Wheels:

Clean and Happy As…: