Pasta e Fagioli soup began in Italy as a simple dish made with inexpensive ingredients, as so many of the country’s most delicious dishes are. After trying several variations, I’ve settled on the Pasta Fagioli recipe that’s perfect for us: a mix of two broths, cannellini beans, sweet Italian sausage, short pasta and broccoli rabe (rapini or lacinato kale) to make it a meal.

Do you perk up at the phrase, ‘peasant dish’? I do. Maybe the word ‘peasant’ began as a way to separate the haves from the have-nots in conversation, but now is more likely to symbolize ingenuity and conjure comforting sensations like the smell of homemade bread baking or a pot of hearty soup bubbling on the stove. To represent dishes with tastes that transcend their humble components. Like Pasta e Fagioli for example which, in Italian, means simply “pasta and beans,” a modest name for a magnificent soup.  Though the soup varies by region in Italy, the fundamentals are the same: olive oil, garlic, vegetables, pasta, beans and flavorful broth that can be made with or without meat.

We tried several versions of this soup to arrive at just the right combination of flavors and textures for our tastes, including Marcella Hazan’s version from her famed book, Essentials of Italian Cooking, that calls for finishing the soup with butter instead of olive oil. But the one I’m sharing with you today is my very favorite, a medley of so many flavors and textures that I love, bubbling together in one hearty and delicious soup.

Step 1: Brown sausage in a large soup pot over medium heat. Pour off all but one tablespoon of fat. Add onion, carrots, celery, garlic and crushed red pepper to sausage; cook and stir until onion is translucent.

Step 3: Stir in pasta and cook until 3 minutes from being al dente. Stir in broccoli rabe or Italian kale and cannellini beans; cook and stir until greens have wilted and beans are heated through.

Step 4: Serve with a drizzle of good olive oil and a sprinkle of parmesan cheese. 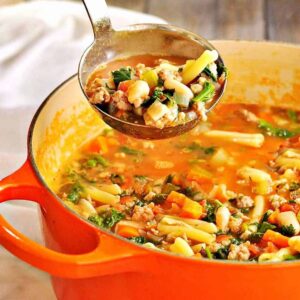 If you plan to eat some of the soup as leftovers for a day or two after making it, cook the pasta separately, toss it in a little olive oil and store covered in the refrigerator. Then add in just what you need in the last minute or so of reheating.