Maybe you have a vegetable nemesis or two like I do. Follow me along the stalls at a farmer's market and I'll be stuffing my basket with asparagus, artichokes, fava beans, spinach, zucchini; you get the idea. But I'll pass right by a bin of parsnips. They've always seemed sickly sweet and oddly medicinal tasting to me. But this week parsnips were part of our CSA share and, honestly, I hate to turn my nose up to any food. So I toted them home with high hopes of finding a new recipe.

That's where my friend Lorraine came in. I sat down to my computer and there was a message from her titled, "Gingered Carrot and Parsnip Soup," with a note that the soup was excellent. The recipe called for heavy cream, which I didn't have on hand. But I did have raw cashews and a note to myself to try the cashew cream I'd read about in Joy's recipe for "Vegan Cream of Broccoli Soup."

Making the cashew cream is simple; soak raw cashews in water for at least an hour and up to 24 hours. Drain the cashews and place in a blender with enough water to cover them by about an inch; blend until smooth. Amazing! I have nothing against heavy cream, but this is a respectable substitution. (I love it drizzled over this Vegan Butternut Squash Soup and this Delicata Squash Soup too!)

The soup is a double success - I won't likely pass the parsnip bin next time and cashew cream is a nice addition to my staple recipes. Thank you Lorraine and Joy! 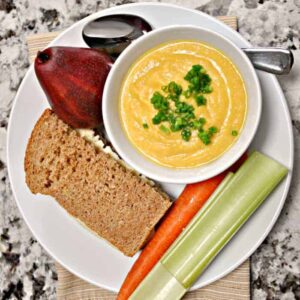 Marissa Stevens
Shredding the parsnips and carrots speeds cooking and makes this a great weeknight soup – a food processor’s shredding disc does quick work of this. I like to scrub the parsnips and carrots but leave the skin intact – you can peel them if you prefer. Also, you can use ½ cup heavy cream in place of the cashew cream.
Save Recipe Saved! Print Recipe Pin Recipe
Prep Time 10 mins
Cook Time 25 mins
Total Time 35 mins
Course Soup
Servings 8 people
Calories 141 kcal

For the cashew cream:

Calories: 141kcalCarbohydrates: 17gProtein: 4gFat: 7gSaturated Fat: 1gSodium: 501mgPotassium: 375mgFiber: 3gSugar: 6gVitamin A: 6265IUVitamin C: 9mgCalcium: 32mgIron: 1mg
Tried this recipe?I'd love to see it! Tag me on Instagram at @pinchandswirl or leave me a comment and rating below.