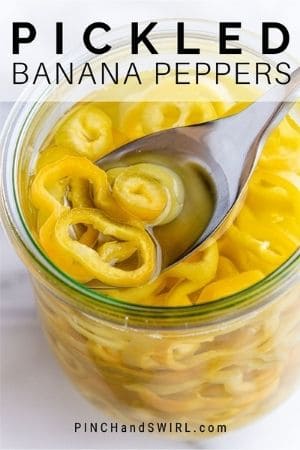 You’ll want to pile these sweet and mildly spicy quick Pickled Banana Peppers on everything, when you’re not snacking on them straight out of the jar!

You won't find an easier pickled banana peppers recipe - just 5 simple ingredients. They have a mild heat, but I'll warn you that they're boldly flavorful: tangy, salty and lightly sweetened with honey. I love them just as they are, but you have endless options for embellishment to make them your own.

Quick pickling banana peppers is a great way to accentuate their gentle sweetness and preserve their crunch. It's as simple as pouring hot brine over crisp banana pepper rings that you've piled into a clean jar. They'll be ready to eat the very next day.

Taste your hot brine to see if it needs adjusting, but note that the flavor will intensify as it cools.

Are Pepperoncini and banana peppers the same thing?

Though they are both in the chili pepper family and look similar, Pepperoncini and banana peppers are not the same. Both are on the lower side of the heat spectrum, compared to the fieriest peppers out there, like ghost peppers and habaneros. And both are considered sweet peppers, but pepperoncini are substantially spicier.

How do I use Pickled Banana Peppers?

Pickled banana peppers shine for their versatility and wide appeal, particularly for those who are not fond of hot peppers.

They add flare and crunch to sandwiches, hot dogs, burgers and pizza, and you can stir them into soups, pastas and chili. They're also a great addition to cheese and meat boards and small plates tapas-style, including dry-cured meat, sausages, semi-hard cheese, and olives.

Because these Pickled Banana Peppers aren't traditionally canned, plan to enjoy them within 1 month.

How to Make Pickled Banana Peppers 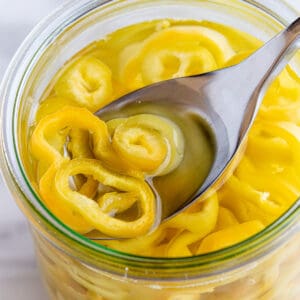