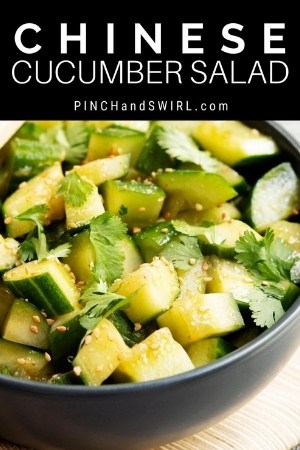 Chinese Cucumber Salad is cool, crunchy, spicy, and sweet and, with just 8 ingredients, it's fast and easy to prepare. A satisfying vegan salad of complex flavors that are just right for rounding out a meal.

You'll smash and dice cucumbers then toss them in a tongue tingling dressing that clings to every ragged edge. A blend of Chinkiang vinegar (Chinese black vinegar), sesame oil, sichuan chile oil, kosher salt, and a touch of sugar. Adorn with a shower of toasted sesame seeds and fresh cilantro and your salad is ready to serve.

How to Smash Cucumbers

Smashing cucumbers releases natural liquids and creates a ragged surface that's perfect for dressing. You have a lot of options here, some messier than others.

To smash cucumbers with a traditional approach, position on a cutting board and give them several hearty whacks with a cleaver, chef's knife, heavy skillet (ideally a small one), or even a rolling pin until they crack and split. To make this a cleaner process, you can cut the cucumber into a few large pieces crosswise and put them in a heavy plastic bag before smashing.

I prefer a less dramatic approach and slice the cucumbers in half lengthwise, set them cut-side down on a cutting board and press firmly with the side of a large knife until they crack and split. Your choice. The key is to end up with lots of jagged edges for the dressing to coat.

You'll find smashed cucumber salad recipes that call for Chinkiang vinegar and rice vinegar interchangeably. I tested this recipe with both and found the Chinese black vinegar version undeniably superior (here's the brand I used). That said, if unseasoned rice vinegar is what you have on hand, feel free to use it.

Tossing the cucumber slices with kosher salt extracts some of their liquid and seasons them as well. If you taste the salad and want it to be a bit saltier, a splash of soy sauce (or light soy sauce) is a great choice. If you're avoiding gluten, be sure to look for a gluten free version.

To kick up the spice in this salad, add more chili oil or a hearty pinch of red pepper flakes.

This makes a refreshing appetizer or side to most noodle or rice dishes or anything you're grilling. Here are some of my favorite pairings:

How to Make Chinese Cucumber Salad

Step 1: Smash cucumbers until they crack and split, then cut crosswise into ¾-inch slices. Toss with salt in a colander set inside a bowl and chill 15 minutes.

Step 3: After pouring out any liquid that has accumulated, transfer cucumbers to bowl. Pour dressing over and toss to coat. Divide among 4 plates; sprinkle with sesame seeds and cilantro and serve. 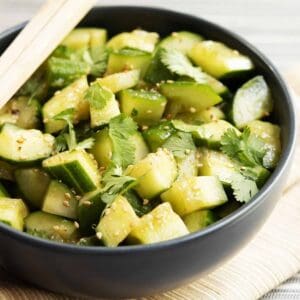