Cauliflower Fried Rice has the taste and texture of traditional fried rice, but there are no grains involved, just finely chopped cauliflower quickly fried until tender crisp and golden then topped with crispy ginger and garlic and a fried egg. A delicious way to enjoy this Asian-inspired dish when you want to eat a little lighter or are following a Paleo diet.

I like the real thing, especially when it comes to food. When food labels squawk: “low fat,” “high fiber,” “sugar free” – I cringe. I’d rather have a smaller portion of the full fat, full sugar portion of, whatever, and preferably in a form that comes without a label – whipped up from individual ingredients in someone’s kitchen.

But this cauliflower fried rice – it’s not the real thing. In that there is no rice, but it is the real thing when it comes to flavor and satisfaction.

Some Cauliflower Fried Rice recipes instruct you to use the chopping blade of a food processor to finely chop cauliflower, but I disagree. It’s too easy to over-process it, ending up with cauliflower so fine that it gets mushy. I prefer to press raw cauliflower florets through the shredding disc of a food processor so the cauliflower rice is the same size every time. Once you sauté it in a bit of oil until it’s golden brown and tender, you would easily mistake it for the ‘real thing’.

How to Make Cauliflower Fried Rice:

Step 1: Press raw cauliflower florets through the shredding disc of a food processor.

Step 3: In a skillet, cook and stir ginger and garlic in oil until crispy. Remove from pan with a slotted spoon or spatula and season with kosher salt.

Step 5: Fry eggs to desired doneness. Top each serving of Cauliflower Fried rice with a fried egg, crispy ginger and garlic and a drizzle of sesame oil and soy sauce.

This recipe is a riff on this recipe for Ginger Fried Rice that Mark Bittman wrote about in the NY Times.

And if you love this, definitely try my Egg Roll in a Bowl – another delicious, lightened up version of a classic! 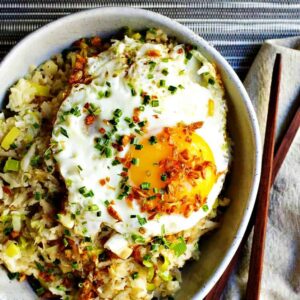