These pork meatballs are easy to make and incredibly flavorful, loaded with aromatics like lemongrass, ginger and garlic. They're very versatile. Serve them as is for an appetizer or party fare, in a simple broth, to make crispy Baked Egg Rolls or Egg Roll in a Bowl.

I knew that I could trust Nigel Slater for a great pork meatball recipe. Not one of his recipes has disappointed me.

I don't know why I was craving meatballs, but they just sounded good. I wasn't looking for meatballs in sauce, though I love saucy Spanish Meatballs, I was in the mood for meaty little round flavor bombs, sans sauce. And that's exactly what these are.

Are you familiar with Nigel Slater? He's an English food writer, journalist and broadcaster (that's what Wikipedia says, so it must be true). And I'll agree with Jamie Oliver's quote on the cover of Nigel's book, Appetite. He is a genius.

Nigel has a way of speaking about food that makes you want to eat, it makes you want to cook, and it makes you believe that you can. I love his dry sense of humor and his lack of pretense. He has excellent cookbooks (The Kitchen Diaries is my favorite) and writes an Observer Magazine food column, but I also recommend his autobiography, Toast: The Story of a Boy's Hunger. It's candid and beautifully written.

He words recipes in a way that encourages, that requires really, you to tweak ingredient amounts to suit your own tastes. For example he calls for 'a fistful or so of bacon' in this recipe. I like that.

It's the spices: lemongrass, ginger, cilantro and garlic combined with jalapeño kick that make these pork meatballs spectacularly flavorful. That and adding a couple of slices of bacon to the ground pork. Why not, right? 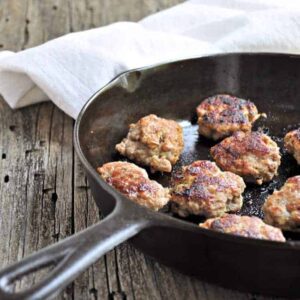 Calories: 394kcalCarbohydrates: 4gProtein: 21gFat: 31gSaturated Fat: 10gCholesterol: 88mgSodium: 430mgPotassium: 446mgSugar: 1gVitamin A: 210IUVitamin C: 11.6mgCalcium: 26mgIron: 1.4mg
Tried this recipe?I'd love to see it! Tag me on Instagram at @pinchandswirl or leave me a comment and rating below.