French Onion Soup is a deeply flavorful blend of onions caramelized in butter and slow simmered in a rich medley of beef broth and white wine, then finished with a splash of Cognac and topped with toasted croutons and bubbly Gruyere cheese.

I've adapted this French Onion Soup recipe from Julia Child's magnificent book, Mastering the Art of French Cooking. I've made a few slight changes: increasing the amount of white wine, reducing the Cognac, adding fresh thyme and topping the soup with toasted squares of crusty bread (aka croutons), less awkward to eat than slices of a standard loaf or baguette. (I did the same in my Vegetarian French Onion Soup recipe.)

It started in Paris

French Onion Soup originated in Paris, France in the early eighteenth century, but I fell in love with it on September 15th, 2001.

It was a Saturday evening and we'd just arrived in Paris with our friends Bryan and Jenn, 6 months pregnant with their first child. Just four days prior we sat together in London, eyes glued to a television screen in horror as we watched images of planes crashing into the World Trade Center. We were, all of us, in Europe for the first time on a long awaited two-week adventure.

Our train arrived in Paris in the late afternoon and by the time we got to our hotel the sky was dark and our stomachs were growling. In the hotel lobby, there were people everywhere. Some were just arriving, like us. Others were in tears, unable to extend their stay with the cities' hotels at capacity, and unable to fly home as planes were still grounded.

We crossed the street to a restaurant recommended by the hotel concierge. Swirls of cigarette smoke and muffled conversations in an unfamiliar language greeted us. But then steaming bowls of rich French Onion Soup, covered in bubbling cheese were set before us. The soup did not heal the uncertainty or sadness of the situation, but it did taste like comfort and hope.

Food is amazing that way, isn't it? I especially notice it during the holidays, when we gather with friends and family to enjoy the foods that have become tradition. Somehow they come to represent something more: warmth, safety, gratitude.

What kind of cheese is used in French onion soup?

Gruyere (pronounced "groo-yair") is the classic Swiss cheese used to top French Onion Soup. If you can find an aged Gruyere, it's worth the extra cost for its flavor and texture. If you can't find Gruyere, you could also use Jarlsberg, Emmental or Comté.

What are the best onions for French onion soup?

You can use yellow onions, red onions, sweet onions, or a combination.

How long does it take to make french onion soup?

Give yourself plenty of time to make this soup, properly caramelized onions take time. It's taken me up to 2 hours, but much of that time is unattended. It is truly an easy process, but the flavor takes time to develop and shouldn't be rushed.

How to make French Onion Soup

Step 3: Stir salt and sugar into onions and increase heat to medium-low; cook and stir 30 to 4o minutes to caramelize onions to a deep golden brown.

Step 6: Remove from heat and stir in Cognac. 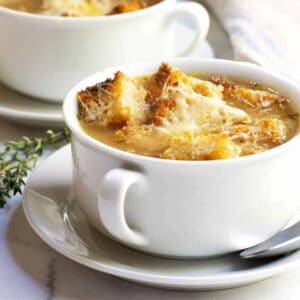 If you don't want 6 servings of this soup at once, no problem! Make the full recipe of onion soup, but prepare just enough bread and cheese for the number of servings you want. Then reheat the leftover soup as needed, finishing with bread and cheese.