Have you ever wondered how to make sweetened condensed milk? You can make Homemade Sweetened Condensed Milk with just a few simple ingredients – it’s easy and tastes so much better than what comes out of a can.

I came across a recipe that I wanted to try for coconut macaroons, but didn’t know of a substitute for sweetened condensed milk since I didn’t have any on hand. What I did have was a cookbook that I’d checked out from the library, BraveTart: Iconic American Desserts by Stella Parks. The book is a treasure trove of recipes for making everything from Homemade Twinkies® and Snickers® bars to perfected pie crust and fudge brownies. I say perfected because this cookbook feels like a mouthwatering science textbook. Who knew that could be done? And, as you’ve guessed, she included a very precise sweetened condensed milk recipe.

I decided to try it and what a revelation! Maybe it’s the heavy cream in addition to the milk (to help keep the mixture from curdling), but the texture and, more importantly the flavor, is far superior than anything I’ve poured from a can. I chose not to add any aromatics like cinnamon or vanilla bean, but I may in the future for making no churn ice cream or some other treat.

Also I found that it took a bit longer on my stove for the mixture to reduce by half, but appreciated her advice to pay attention to how long it takes your dairy mixture to come to a simmer: shorter than 12 minutes, turn the burner down slightly; longer than 12 minutes, turn it up slightly. She also warns against using sweeteners like agave, maple syrup, honey, coconut sugar, brown sugar and even raw cane sugar as their higher acidity may cause the dairy to curdle. See what I mean? Science textbook!

The version of the recipe I’m posting here is slightly simplified from the original, skipping the instruction to weigh on a digital scale before and after simmering. You can certainly go that route if you like and will find her instructions to do so here.

Note that sweetened condensed milk and evaporated milk are not the same. Both are heated until reduced by about half of their original volume, evaporating off water content. But evaporated milk is not sweetened and can’t be used in recipes interchangeably.

How to Make Sweetened Condensed Milk

Step 1: Combine milk, cream, sugar and salt in a saucepan over medium heat; bring to simmer, about 12 minutes.

Step 2: Stir and simmer until mixture has reduced by half, about 30 minutes more. It will foam suddenly just before it’s finished. Let the foam subside and transfer to an airtight container. Let cool completely; refrigerate for up to a month. Bring to room temperature before using. 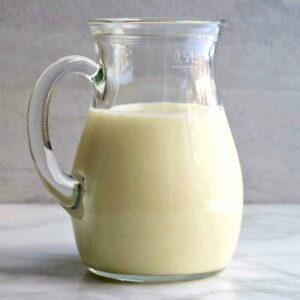 Keywords: Christmas, easy, from scratch
Tried this recipe?I’d love to see it! Tag me on Instagram at @pinchandswirl or leave me a comment and rating below.
1579shares