Homemade Marshmallows, billowy soft and tender tasting of creamy, sweet vanilla beans taste nothing like what you'll pull from a bag. They're delicious enough to eat straight, but you can also toast them over a campfire for a classic summer treat!

I've tried several recipes for Homemade Marshmallows and this is by far my favorite.

It's important, I think, to choose your treasures in life. "For where your treasure is, there your heart will be also." That's a Bible verse that I grew up hearing and not thinking much about. But it rings true. It's ironic that the 'real' treasures in life aren't tangible: love, health, kindness, joy. Without conscious choice, it's easy to allow impostors like wealth, image, and possessions to consume our attention.

Despite this belief, I do have a few material treasures: my wedding ring, my dad's paintings; a gift from my father-in-law, a necklace that once belonged to my mother-in-law; and a handmade set of campfire forks, a gift from my step-dad.

I don't think I've introduced you yet to Gary.

When I was twelve years old, an only child, my mom married Gary. With the help of my grandparents, she'd been raising me on her own since I was about a year old. The thing about Gary was that he had 10 kids. Yes, you read that right. So when my mom married him, as you've guessed, life as I knew it was over.

The first years of their marriage were rocky. Gary believed in discipline and self-restraint, my mom favored her hippie roots of peace, love, and understanding. Their shared faith brought them together, but also, I think they saw in each other what they lacked individually. After 29 years of conflict and compromise, collaboration and companionship, they've built something real - an admirable love and devotion to each other.

As for me, I had never competed for attention and was led to believe by my mother and grandparents that I was 'practically perfect in every way', like a child Mary Poppins. Gary had a different perspective. In his eyes I was undisciplined and lacking practical skills, like keeping a tidy home, that I would need as an adult. At first I tried to please him, but over time resolved that I could not.  So throughout my adolescence and into young adulthood, I resisted his direction and avoided his presence.

During my college years, a change began. I remember receiving a card in the mail with a check, just from him, and a note that he was proud of me and wanted to help with my expenses. Then at my wedding, he lined the aisle with his carefully tended rose bushes and arranged gorgeous bouquets for all of the tables. My perspective of him slowly changed; I began to see him as a man: a real person with flaws and greatness, strength and vulnerability.

Gary is an artist, not in fine art like painting or sculpture, but in landscape building and design. He's been a landscaper of sorts since he was 19 years old and has owned a successful landscaping business for more than 50 years. He's trustworthy and the kind of man who will work harder and deliver more than you'd ever ask for or expect.

He's also faithful, as a husband, as a friend, as a father, and as a believer. Each day he prays for literally dozens of people by name - not just his family and friends, but people he has encountered or heard about throughout his life. I remember sitting with my father-in-law in the wee hours of morning, feeling desperate and helpless while Keith was having an emergency neck surgery. I knew that Gary would be praying and that gave me strength and hope.

Many Christmases ago, Gary surprised Keith and I with a set of campfire forks - he'd welded the forks and built a lovely wooden box to house them in. On the box cover, he drew an idyllic mountain scene with a woodburning pen. I treasure this gift. I treasure, of course, not the tangible item but what it represents: healing, respect, friendship, family.

With these forks around a campfire, you can make perfectly toasted marshmallows. And homemade marshmallows are the king of marshmallows, so that's the recipe I'm sharing with you today. I've tried a few versions and this one from Michael Recchiuti's spectacular book Chocolate Obsession is, by far, my favorite. The process is simple and the ingredient list small, but as with any candy it requires preparation and caution as the liquid you'll be dealing with is molten hot.

A freestanding mixer is a must for making marshmallows. You'll be giving your mixer a workout, whipping at high speed for about 15 minutes after you dribble the hot, sugary syrup into the whipped egg whites. After that, it's a waiting game. They need to sit uncovered, overnight at room temperature to set up before cutting into decadent little pillows. (If you can't wait that long, you need to know about marshmallow meringue - check out these S'mores Brownies.)

You'll end up with 50 to 60 marshmallows, enough for a nice sized camping group or to wrap up in canning jars for friends or neighbors. They can also be stored in an airtight jar at room temperature for a month (good luck with them lasting that long). 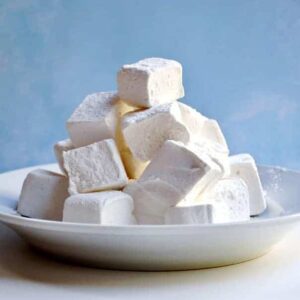 Store marshmallows in an airtight container at room temperature for up to 1 month.

Calories: 55kcalCarbohydrates: 14gSodium: 6mgPotassium: 2mgSugar: 14gCalcium: 1mg
Tried this recipe?I'd love to see it! Tag me on Instagram at @pinchandswirl or leave me a comment and rating below.
« Homemade Tonic Water
Linguine with Cauliflower, Anchovies and Raisins »