Muffuletta panzanella, meaning simply ‘bread salad,’ is a simplified and lightened up version of the legendary sandwich. But the flavor is unmistakably ‘muffuletta’. Make this salad your own, swapping in your favorite combination of cheeses and cured meats.

We were in New Orleans ducking into a sandwich shop, out of the daily downpour. But it wasn’t just shelter we were after, it was also a muffuletta sandwich.

Of the famous dishes we tried in The Big Easy, the muffuletta sandwich stood out – piled high with salami, mortadella, spicy sopressata, provolone, mozzarella and spicy briny olive salad. Also worthy of their accolades: beignets from Café Du Monde, seafood jambalaya and coffee with chicory.

Muffuletta sandwiches are picnic perfect because they are best made ahead of time, giving the flavors time to meld and soak into the bread. When you make this salad, you’ll toss the bread with dressing a few minutes ahead of time for the same reason. Be sure that the ciabatta or focaccia you use is fresh and soft, primed to soak up delicious juices from the dressing.

And if you love Southern food like I do, don’t miss the BEST crab cake recipe with Remoulade Sauce, or this Slow Cooker Jambalaya, my favorite Skillet Cornbread (make Cornbread Pudding with any leftovers), Shrimp Creole, Homemade Biscuits, and, of course, Fried Green Tomatoes! 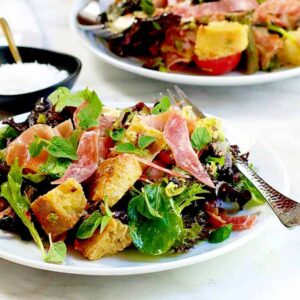 15shares
All of the flavors of the classic sandwich, but lightened up as a bread salad! This recipe serves two as a main dish or four as a side. Scale the recipe to as many hungry mouths as you’d like to feed!
Prep Time15 mins
Total Time15 mins
Course: Main Course, Salad
Servings: 4 people
Calories: 753kcal
Author: Marissa Stevens