You won’t believe how easy it is to make Slow Cooker Jambalaya! Melt in your mouth chicken, smoky sausage and buttery shrimp mixed with a medley of tender vegetables and hot rice in a rich, spicy sauce.

This is my very favorite recipe for jambalaya – it’s so meaty! You cook it hot and fast in a slow cooker instead of the typical stovetop method, adding shrimp and rice at the end. It’s a wonderful way to feed a group (up to 10 people as a main dish) and if you’re lucky enough to have leftovers, it’s just as delicious the next day.

Jambalaya originated  in Louisiana, often associated with New Orleans, and has roots in French, Spanish and West African cuisine. There are a couple of distinct ways to make it: Creole jambalaya (like the recipe I'm sharing), and Cajun jambalaya. Both start with the 'holy trinity' of onions, green peppers, and celery; the primary difference is that the Cajun version has no tomatoes.

What is the difference between gumbo and jambalaya?

Jambalaya typically does not include the okra or filé powder that is common in Gumbo. Otherwise the two are similar in their vegetables and seasonings, meats, sausages, and seafoods.

Tips for perfect jambalaya every time

Note that it’s important to brown the chicken, sausage and vegetables before adding them to the slow cooker. I’ve tried to skip this step and the flavor is just not the same.

I've called for 'hot cooked rice' instead of uncooked rice, because I prefer to cook the rice separately. It's easy to end up with undercooked or overcooked rice when it's added raw. Cooking rice on its own ensures a reliable texture in the final dish. The style of rice is up to you. I like to use a long grain brown rice, but white rice is also delicious.

The spice level here is mild to medium - mostly depending on your choice of sausage and Creole seasoning (or Cajun Seasoning). But you can always kick up the spice with hot pepper sauce or cayenne pepper.

Make this easy jambalaya recipe once, and I bet you’ll come back to it again and again. It’s fantastic and entirely reliable!

Don't miss these other southern favorites!

How to make slow cooker jambalaya

Step 1: Brown chicken and sausage in two batches, transferring each to slow cooker.

Step 4: During last 15 minutes of cooking time, stir in shrimp.

Step 5: Once shrimp has cooked through, stir in hot cooked rice. Season to taste with salt, pepper and hot pepper sauce (or cayenne pepper). Serve. 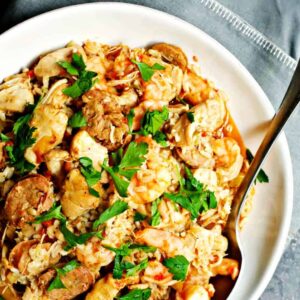