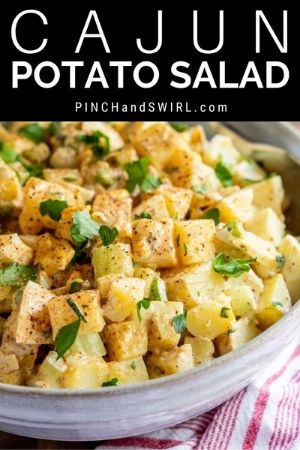 Cajun cuisine is one of the most vibrant and flavorful in the country, borrowing flavors from all the cultures that merged in Louisiana’s south during the 18th century. Still, it has the finesse of French cooking, known for its balance and precision.

Cajun Potato Salad is especially versatile, ideal for all kinds of backyard BBQs, get-togethers and picnics. It's easy to make, ready in 30 minutes or less, and you serve it after just 1 hour of chilling or refrigerate for up to 3 days.

Is it better to boil or steam potatoes for potato salad?

Either work well for making potato salad. It is easier to overcook potatoes when boiling, but less of a concern when using waxy or semi-waxy potatoes. With either method, it's important to cook just until potatoes are easily pierced with a fork so they hold their shape in the salad.

What kind of potatoes are used for potato salad?

Waxy or semi-waxy potatoes like Yukon gold potatoes, white potatoes, red potatoes and new potatoes are best for potato salad recipes because they hold their shape (and don't need to be peeled!) Peeled russet potatoes are more likely to fall apart.

Are Cajun Cuisine and Creole Cuisine the same?

There’s a bit of confusion when talking about Creole and Cajun cuisines because, more often than not, the terms are used interchangeably. But the terms have different origins and traditions.

Creole cuisine started in New Orleans, well before Cajun cooking began 40 years after New Orleans was established. It blended the food of French, Spanish, Native American, West African and Caribbean cultures (and more). It's thought of as more refined or cosmopolitan with rich sauces, herbs, tomatoes and seafood than rustic, robustly flavored Cajun cuisine that's typically meat-centric, made with simple preparations and typically does not include tomato-based sauces.

Cajun Cuisine comes from the Acadians, French colonists who once occupied the islands in the northern East Coast, across the Canadian Border. The English, who already held a strong hand in the Americas, expelled the Acadians, and some ended populating Southern Louisiana. Here, the immigrants developed their own style of cuisine incorporating French, Spanish, and West African cooking techniques.

The ‘Holy Trinity’ of Cajun and Louisiana Creole cuisines.

French cooks have their own trio of base ingredients, called mirepoix, made of carrots, onion and celery. But using base ingredients to build soups, stews and sauces is not unique to France. The Spanish have sofrito, commonly garlic, onion, peppers and tomatoes, a combination that certainly influenced Creole and Cajun cuisines alike.

Think of this Cajun Potato Salad recipe as a great place to start, but feel free to make it your own. Perhaps you’re not a big fan of hard-boiled eggs; just reduce the number or leave them out altogether! Prefer sweet relish to dill? Go for it! Want a spicier kick? Add a blast of cayenne pepper along with the Cajun seasoning. For the mustard, use your favorite: yellow mustard, Dijon mustard, or Creole mustard are all great stand-ins for the whole grain mustard I've called for. You can even embellish this salad with a bit of chopped bacon as some Louisiana restaurants do.

How to Make Cajun Potato Salad

Step 2: Whisk together mayonnaise, mustard, Cajun seasoning, kosher salt (optional) and pepper until smooth in a very large bowl. Stir in bell pepper, onion, celery, dill relish and parsley. Gently fold in partially cooled potatoes and eggs until well combined. Cover and refrigerate at least 1 hour and up to 3 days before serving. 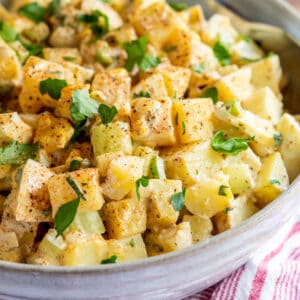