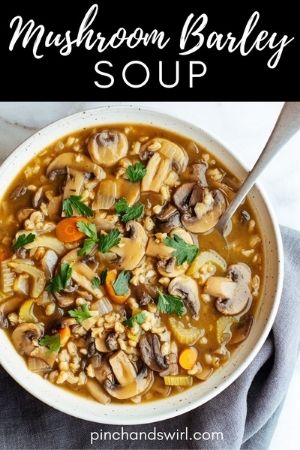 This Mushroom Barley Soup recipe is not one of those bait-and-switch recipes where you have a bunch of cooking to do ahead of time. Just pile all the ingredients into your slow cooker and, in about 6 hours, you’ll have a delicious, comforting soup and a kitchen that smells amazing.

There’s nothing more comforting than hearty stews and soups when it’s chilly outside. Brimming with mushrooms and earthy, satisfying barley in a richly flavored broth, this soup is the perfect example.

The magic of umami.

This soup is meatless, but that doesn’t mean it's not packed with umami flavors. With a blend of chicken or vegetable broth, fresh mushrooms (is there a 'meatier' vegetable?) and mushroom or beef broth along with tender barley for a silky mouthfeel, you get a rich, complex soup without adding meat. And it's easy to make this soup vegetarian / vegan by using only mushroom broth or a blend of mushroom broth and vegetable broth.

Serve a steaming bowl with a side of crusty bread and I promise, you'll never miss the meat.

Is there a difference between barley and pearl barley?

The two most common varieties of barley are pearl barley and hulled barley or barley groats. Hulled barley is the whole grain version where only the toughest outer hull is removed. This type of barley is more nutritious and has more protein and fiber, but it takes longer to cook.

Pearl barley is still nutritious and a good source of fiber, but less so than barley groats because the hull and bran have been removed. The polished grain cooks faster, and is the most common type of barley.

Do you have to cook barley before putting it in soup?

You don’t need to cook the barley before making this soup. The slow cooker simmers it to tender perfection, soaking up all of the other delicious flavors, during the lengthy, but hands-off cooking time.

Do I need to soak pearl barley before cooking?

No, pearl barley has had the hull removed, has been steamed to remove the bran and softens nicely as it cooks without presoaking.

If you use hulled barley / barley groats then an overnight soak would help them cook faster and be more digestible, particularly if you add a splash of vinegar or lemon juice (see my How to Cook Farro post for more on this). And you’d want to add them to this soup in the first step as they take longer to cook than the pearled version.

How to Make Mushroom Barley Soup

Add all ingredients to a slow cooker; stir to combine and cook on high for 4-5 hours or on low for 6-7 hours. Season with salt and pepper and serve. 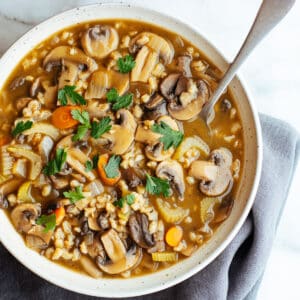