Chicken Pozole Verde is a hearty and delicious Mexican soup with a vibrant green, deeply flavorful broth loaded with tender chicken and hominy. It's a festive soup to serve on special occasions, but is easy enough to whip up on a weeknight with this simple recipe.

This history of this hearty and vibrantly flavorful soup goes back to the ancient Aztecs, so some form of it has been around for at least five hundred years! It's often made with pork, but here I've used boneless, skinless chicken thighs (you can use boneless skinless chicken breasts if you prefer). With just 15 minutes of prep and some hands-off time on the stovetop, you'll be sitting down to enjoy it in less than an hour.

What goes into Pozole Verde?

Pozole Verde is a rich blend of chicken broth, tomatillos, green chiles and aromatics with tender chicken and white hominy as its main ingredients. Tomatillos (also called husk tomatoes) are key, with their signature tangy and refreshing flavor that's difficult to replicate with any other ingredient. This is just the base, though; the fun part is the all of the toppings.

A bowl of pozole verde isn't complete until you top it with your favorite toppings, from sliced radishes and jalapeño peppers to fresh cilantro, avocado and crispy tortilla chips. Keep it simple or pile it high, it’s one of the most ancient build-your-own meals in the world!

What is the difference between “posole” and “pozole”?

If you’ve browsed around pozole recipes, you probably found the word spelled either with an ‘s’ or with a ‘z.’ Both terms mean the same thing. The word pozole comes from the Nahuatl word pozolli, which means sparkling, likely referring to how foamy the water becomes when boiling hominy.

Hominy is made from dried corn kernels treated with an alkali (nixtamalization). Unlike sweet corn, hominy is not sweet, but starchy. It doesn't have much flavor on its own, but absorbs the soup's flavors nicely.

How to Make Chicken Pozole Verde

Soften onion, garlic, tomatillos, jalapeños, oregano and cumin in hot oil in a large pot or Dutch oven over medium heat. Add broth and bring to simmer. Add chicken thighs and simmer until very tender, about 20 minutes. Transfer chicken to bowl or cutting board and shred with two forks.

Strain out solids from broth and puree in blender along with cilantro and ½ cup of cooking liquid. Return mixture to soup along with shredded chicken and stir until heated through; season with salt to taste. Serve with your choice of toppings. 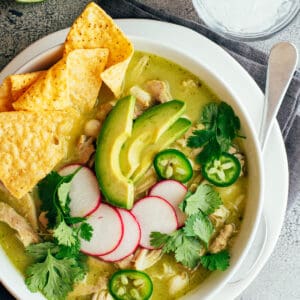