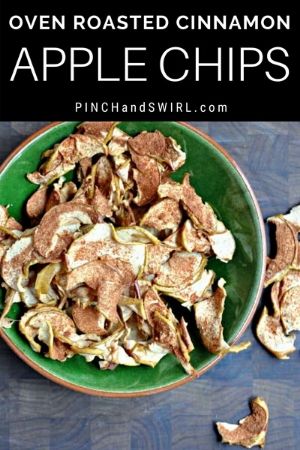 It's not a terrible problem really, to have a friend bring you a bag of 20 apples fresh from a Washington orchard. But with just the two of us, I feared they would go bad before we could eat them all. And that's where my aunt Krista came in.

Just a couple of days before the gift of apples, she'd posted a recipe on Facebook for apple chips. They were lovely, sliced in thin circles and spaced in a single layer. But I wondered how long it would take me to bake 15 apples in such a meticulous way. So I took a different approach, we'll call it rustic.

I decided to use the food processor to slice the apples - slicing them in half first and then cutting out the core in a wedge. Then I layered them on 3 parchment lined baking sheets and cooked them for 9 (!) hours. With just 15 minutes of prep work, they were in the oven. And the smell in the house - nothing short of heavenly. It lasted for days.

Slow roasting the apples in an uneven layer, results in chips at various degrees of doneness - some bites chewy, others crispy, or a mix of the two. Fifteen apples filled 2 1-liter jars to the brim. I put one jar in the refrigerator, the other in the freezer. They're delicious either way, but I especially like them straight out of the freezer.

Make a batch as a snack alternative during these pound inducing holidays. Or fill jars with them and give them as gifts. 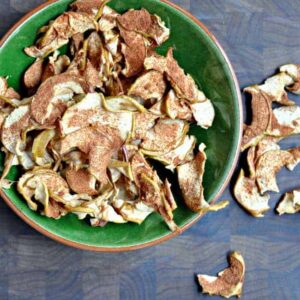 Marissa Stevens
I sprinkled all of my apples pretty heavily with cinnamon. Next time I'll do a mix of cinnamon coated and plain as I think they would be equally delicious without spice.
5 from 1 vote
Save Recipe Saved! Print Recipe Pin Recipe
Prep Time 15 mins
Cook Time 9 hrs
Total Time 9 hrs 15 mins
Course Snack
Servings 15
Calories 95 kcal