These S’mores Brownies start with a chewy blondie brownie layer that tastes like a buttery, honey kissed graham cracker followed by a thick layer of creamy dark chocolate and finish with a toasted billowy smooth marshmallow meringue.

I’ve had this s’mores brownie recipe swirling around in my head for weeks now. I wanted to capture the true essence of the classic campfire treat in an elegant way – dress it up a bit, but keep the components the same. That meant a graham cracker flavored base, but I didn’t want to do a graham cracker crust that might crumble when picked up. So the base of these is a blondie brownie using whole grain flour and honey, reminiscent of homemade graham crackers. The center is creamy and dark, a simple mixture of chocolate and butter that is sturdy enough to cut, but yields easily when you take a bite.

But what I’m most excited about is the top! I thought I would need to make full-fledged homemade marshmallows, but then I discovered this marshmallow meringue recipe from Food & Wine – no gelatin, no molten hot sugar, no torturous overnight wait before cutting. Pure genius! It’s very similar to a classic meringue with the caveat that you heat the egg whites and sugar before whipping. The result is a thick, glossy meringue that tastes exactly like marshmallows. Mound it over the chocolate, set it under the broiler for a quick toast and you’re ready to cut and serve! 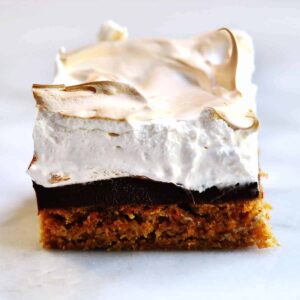 For the Blondie Brownies

Bars may be refrigerated for up to 2 days.