If you've read Nina Planck's What to Eat and Why, you may remember her referring to vegetable serving sizes as a 'doll’s portion'. That sounds about right. But, then again, I don't want to think about vegetables in portions.

I do think about portions of meat, cheese, butter, and bacon - anything really that might come between me and being able to zip up my jeans. But I have no interest in defining my diet by what I don't eat. I'd much rather focus on the food I love and everything that I have yet to try.

This hasn't always been true. I've spent my share of time agonizing over fat and cholesterol content, smoke point, BPA, Omega 3, the list goes on. And it's not just me that I've tortured, Keith has patiently participated in whatever my current mantra happened to be. I remember he and I laughing at this New Yorker cartoon because it resonated with the control I tried to wield over our diet.

At some point I realized that being neurotic about food might be worse for us than a less-than-perfect diet. Whatever that is.

A couple of weeks ago, there was a great article in the New York Times titled, Eat Your Heart Out. The article discusses findings from an Australian study on the diets of men with heart disease in the late 1960s to early 1970s. A couple of notable quotes:

The men were followed for an average of 39 months, and those on the polyunsaturated-rich diet lowered their cholesterol levels by an average of 13 percent. But they also were more likely to die, and in particular to die of a heart attack, than those who stuck with their usual diet, which consisted of about 15 percent saturated fat.

In broader terms, the new analysis muddies the already murky issue of just how diet affects heart-disease risk and health in general.

I don't mean to suggest that I have a breezy approach to eating. You've probably noticed a lot of whole grain and vegetable laden recipes on this blog. You may have also noticed that I don't often suggest packaged foods as ingredients. And if you hang out with us, you know that we're not fans of mainstream fast food. We're also picky about buying meat; we like to know that the animals were treated well, including sun on their faces and their choice of plant or bug in their bellies. Vegetables, organic please, unless they're absolutely out of our budget. But you'll also see Keith and I, icy beer in hand, splitting a burger at one of the brewpubs in Bend. And, what's that, it's your kid's birthday and you're having the party at McDonalds? We'll be there - save us some fries.

What about you? You're here, so I bet you like to cook. What's your approach to cooking and eating?

While you're thinking about that, here's a recipe. It's a super delicious dish that we've had several times in the last couple of weeks. It comes together in less than 20 minutes and boasts enough vegetables to impress even Nina Planck. I've called for bacon, but just a little, to flavor the broth and make the greens sing.  And my favorite part, it's topped with the fresh flavor punch of Meyer lemon gremolata: Italian parsley, Meyer lemon zest, garlic. 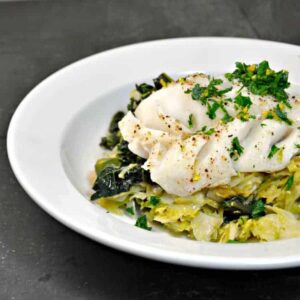 Marissa Stevens
If you want to skip the bacon, just use olive oil and a bit of smoked salt if you have some one hand. Feel free to double the recipe (or more) if you have more people to serve.
Save Recipe Saved! Print Recipe Pin Recipe
Prep Time 10 mins
Cook Time 15 mins
Total Time 25 mins
Course Main Course
Servings 2 people
Calories 329 kcal