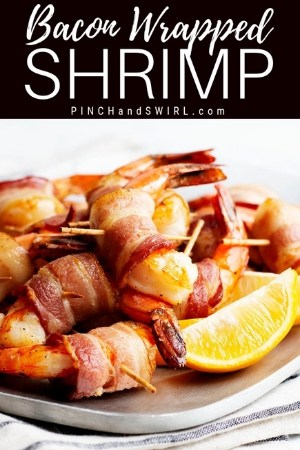 When done right, Bacon Wrapped Shrimp are one of the easiest, most delicious appetizers you can make. There are a couple of secrets to making them perfectly succulent.

First, it's important to partially cook the bacon before wrapping around the shrimp. Second, take it easy on the seasoning. I'll explain.

Why pre-cooking the bacon is important.

It takes 8-10 minutes to make juicy, flavorful shrimp in the oven. Baking bacon until crispy takes 15 to 20 minutes! So starting with raw bacon when making bacon wrapped shrimp means overcooked shrimp, or worse, undercooked bacon. For properly crispy bacon, you need to give the bacon a head start. It’s worth the effort as it adds very little time or complexity. (The same goes when making Grilled Bacon Wrapped Shrimp and you pre-cook the bacon right on your grill!)

When I'm serving seafoods like shrimp, crab and scallops, I like to prepare them as simply as possible, adding only ingredients that accentuate their already delicious flavors. (As in these recipes: Crab Cakes, Crab Salad, Shrimp Salad, Bacon Wrapped Scallops and Salt and Pepper Shrimp).

Bacon wrapped shrimp are the same. Many recipes call for heavily seasoning them with spices or sauces, but I disagree. Shrimp wrapped in bacon needs just olive oil, salt and pepper to be utterly delectable (also true for Bacon Wrapped Asparagus)! And if you want to serve them with a dipping sauce, this remoulade sauce is perfect.

How to Make Bacon Wrapped Shrimp

Step 1: Cut bacon strips in half crosswise and arrange on an oven safe rack set in a baking sheet. Cook bacon at 425˚F for 5 to 10 minutes, depending on bacon thickness.

Step 3: Wrap each shrimp with a piece of bacon, securing with a toothpick and return to oven safe rack.

Step 4: Bake 10 minutes until shrimp and bacon are juicy and cooked through. Serve. 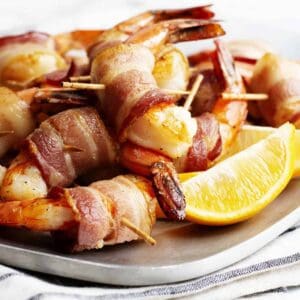