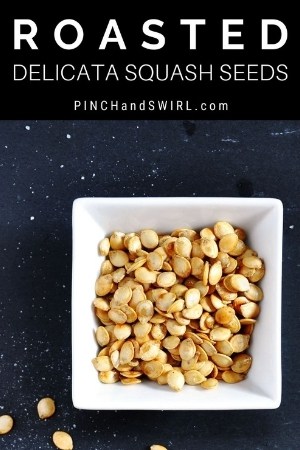 We were first introduced to delicata squash by a woman who worked in the Central Market produce department in Poulsbo, Washington. She was handing out samples. It's an odd thing to remember considering it was at least a dozen years ago, but the taste and texture made a strong impression.

When I learned that the squash samples had been simply baked until tender and served with nothing - no butter or sugar, not even salt - I couldn't believe it, so delicious.

In the fall and winter, we eat a lot of delicata. We simply cut the squash in half lengthwise, scoop out the seeds and strings, and roast it cut side down in about ½ inch of water at 400°F until tender, about 40 minutes. (bonus recipe 😉 )

Here's another tip: grapefruit spoons work wonderfully for scooping out the seeds and strings from smaller winter squash. Those sharp little teeth make quick work of it.

Last week I saw that we had two delicata squashes coming and I started to think about the seeds. I'd toasted pumpkin seeds many times over the years, but had never tried toasting the dainty, plump seeds that come from a delicata. Then I stumbled across this post by Diane of Created by Diane and was intrigued. She claimed that the secret to perfectly roasted seeds was to meticulously clean them and then...wait for it...boil them first.

I tried her method, and now I'm a believer. I don't know why it makes a difference, but these are the lightest, crispiest toasted seeds I've ever had. 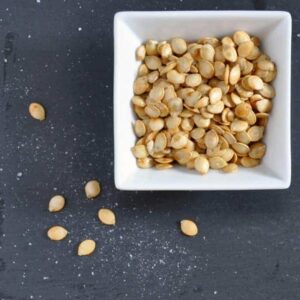