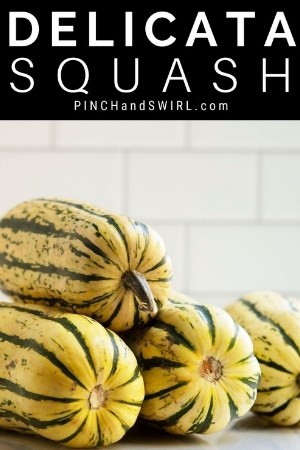 Hidden among the conventional squash like acorn and butternut at the fall farmers market is a variety of squash that looks a little like a yellow cucumber. This is delicata squash. It is a delicious, easy-to-prepare, and good-for-you variety that is an unusual yet great way to expand your squash selection.

Before you take some home, inspect your choices for brown spots and softness, particularly at either end. If they have either or both, they are over-ripe and ready for the compost heap, not your kitchen.

What is Delicata Squash?

People ask this question because this variety of squash hasn’t been around very long, at least in modern times. People did not grow it often because it was prone to mildew-type diseases. In fact, after the Great Depression, it nearly went away completely. Enter a research team at Cornell University, who bred a non-hybrid variety that resists almost all squash diseases so gardeners and farmers can now grow it successfully.

The squash is native to Central and North America. Native Americans introduced what became known as delicata to Europeans when the Europeans began settling in the so-called New World. Scientists officially documented it as a unique group as early as 1856.

Delicata is part of the species called Cucurbita pepo, which includes summer squashes such as zucchini, yellow crookneck squash, and pattypan squash, as well as the winter squash varieties of butternut squash, pumpkins, acorn squash, and spaghetti squash.

Delicata is different because it’s pin-striped. Its delicate, cream-colored outside skin is accented by green stripes that run lengthwise on the squash’s tubular body. They’re usually small squashes, often five or six inches in length, and about three inches in diameter. The inside is similar in coloring to the outside, minus the stripes.

Delicata squash has a subtly sweet flavor that is irresistible. No need to add any sweetener, it’s usually sweet and flavorful just as it is. Delicata’s yellow flesh has a creamy texture and a, well, delicate, squashy taste.

The squash normally propagates on a vine but growers have also developed bush varieties such as “Bush Delicata.” Other variations like “Honey Boat” and “Sugar Loaf” offer different levels of sweetness.

Delicata is a good source of potassium and fiber. It also has vitamins B and C, and the minerals manganese and magnesium.

How do you cook delicata squash?

You can cook delicata squash in a variety of ways to enjoy on its own or as a part of a larger recipe. It’s delicious roasted, steamed, sauteed, and boiled.

How to Prepare Delicata Squash

First cut off each end of the delicata squash then cut it in half lengthwise. Scoop out the seeds with a spoon. Discard the seeds or roast them using this recipe: Toasted Delicata Squash Seeds. You don’t need to peel delicata squash when roasting; however, you’ll want to remove the peel to steam, saute, mash, or boil it.

How to Roast Delicata Squash

Roasting delicata squash enhances it’s natural sweetness. To enjoy on its own, place halves flesh side down on a parchment lined or lightly oiled rimmed baking sheet. Roast at 400˚F for 30 to 45 minutes until tender, depending on the size and age of your squash. To test for doneness, pierce with a fork, which should go in smoothly and penetrate all the way through to the squash flesh.

For mashed delicata squash or if you plan to scoop out the flesh, it’s best to roast with a small amount of water to ensure that the flesh is soft and cooks evenly. To do so, seed and cut the squash in half lengthwise and place, flesh side down, in a baking dish filled with water 1/4-inch deep. Roast at 400˚F for 30 to 45 minutes until tender. When cool enough to handle, scoop out flesh and proceed with your recipe.

For quicker roasting and more caramelized edges, cut seeded squash halves into 1/2-inch wide half-moons (or cut into cubes). Toss slices in a large bowl with olive oil, salt and pepper (or other spices) and spread in an even, ideally single layer on a lightly oiled or parchment lined rimmed baking sheet. Roast at 400˚F for 25 to 30 minutes until tender with golden brown spots, turning / tossing about half way through roasting time. This makes an excellent side dish or addition to green or grain salads or pasta dishes.

You can stuff delicata squash with a blend of pre-cooked meat or vegetables and pre-cooked grains, rice, and/or nuts. For an average size squash, you’ll need about 2 cups of stuffing mixture.

First, roast the squash as directed above. When a fork pierces the squash skin easily, turn squash halves flesh side up and stuff. Roast until stuffing is heated through, 15 to 20 minutes. For cheese topped stuffed squash, sprinkle cheese over the top just long enough for it to melt, 8 to 10 minutes.

To steam delicata squash, first peel it with a vegetable peeler, then cut it in half lengthwise. With a spoon, scoop out the seeds and stringy fiber with a spoon, and cut the squash into one-inch cubes. Place the cubed squash in a steamer basket and cook over simmering water until the squash is tender, 8 to 10 minutes. Pierce a cube or two with a fork. If they are soft all the way through, they’re done.

You can also steam slices of delicata, but they’ll take a little longer, 12 to 15 minutes.

To sauté delicata squash, prepare it similar to steaming by peeling it with a vegetable peeler, removing the seeds and fiber with a spoon, and cutting it into cubes or slices. Heat a little olive oil in a pan and sauté until tender and lightly browned, 8 to 12 minutes. Season as desired.

People often want to know if you can roast delicata seeds like pumpkin seeds? Yes and, in fact, it’s a shame to throw out the seeds. They are a source of protein, fiber, calcium, and iron, and they contain a high level of magnesium. A great alternative to other munchies like pretzels or chips. See this post on How to Roast Delicata Seeds for detailed instructions.

However you decide to prepare delicata squash, you’ll find it is a flavorful, versatile squash. 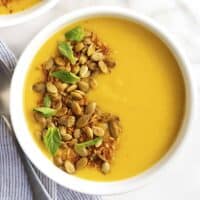 Roasted Delicata Squash Salad with Creamy Tarragon Dressing
Savory, salty, bitter, peppery, sweet – this salad has it all. Every bite is deliciously different! adapted slightly from this recipe by Melissa Clark.
Check out this recipe 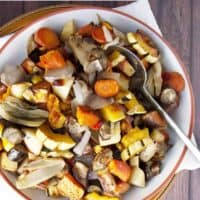 Simple Roasted Fall Vegetables
This is a recipe-not-recipe. 🙂 Use any fall vegetables you like! Parsnips, turnips, celery root, Butternut squash, Brussels sprouts….you name it!
Check out this recipe

Cornbread Salad
24 fresh sage leaves may sound like a lot, but, trust me, once they’re chopped and butter crisped you won’t mind. This recipe makes enough for four generous main course servings.
Check out this recipe

Crunchy Salty Roasted Delicata Squash Seeds
Perfectly salty and crunchy seeds that make a perfect snack or salad or soup topper! Adapted from this recipe by Diane of Created by Diane.
Check out this recipe

Giant Delicata Ravioli with Sage and Brown Butter
This will make 6 or 8 ravioli, but you’ll just cook 2 at a time. The sauce recipe is just enough for two so scale it if you’re cooking more than just 2 ravioli. Freeze extra ravioli in a single layer in a freezer bag. Slide them frozen into simmering water when you’re ready to eat them. They’ll take a couple of extra minutes to cook.
Check out this recipe
24shares