Cornbread Salad is the best way to use leftover Skillet Cornbread or Mexican Cornbread! It's a mouthwatering mixture of buttery crisp cubes of cornbread, bacon, roasted delicata squash, black eyed peas, kale and butter-fried sage all tossed in a tangy vinaigrette.

Italians make clever use of leftover bread: ribollita in the winter, a hearty soup that evolves all week, and panzanella (bread salad) in the summer, a substantial salad of bread cubes mixed with peak summer produce. It's incredible how summer's jaw-dropping fresh tomatoes, thin slices of onion and basil, and a drizzle of vinegar and peppery olive oil can revive a stale loaf.

You may remember when I re-imagined panzanella as a deconstructed muffuletta sandwich, i.e., Muffuletta Panzanella, or used leftover pita bread to make Fattoush Salad and in this cornbread salad, I've given it an entirely southern twist: with oven-crisped cornbread cubes, salty bacon, sweet delicata squash, earthy kale, tender blackeyed peas and butter-fried sage.

Of these four bread salads, it would be tough to pick a favorite, but I do remember the first. We stood at the bottom of a hill in the tiny Tuscan town of Civitella Marittima. We were waiting for Carlo. He arrived, swung open the passenger door, and welcomed us aboard his well traveled VW station wagon.

We spent the day twisting and bumping along Tuscan roads while Carlo educated us, like a father would his children, about the centuries old traditions of wine making and olive pressing. Without the afternoon drama of an emergency trip to the vet for a viper-bitten dog, it might have been a perfect day. But that's another story.

The bread salad that Carlo prepared for our lunch inspired me to create this American South version. His consisted of bread, tomatoes, mozzarella, and fresh garden greens lightly dressed in tangy vinaigrette, ingredients that he had on hand. This cornbread salad too came from what I had on hand, an ensemble of ingredients with a southern flare: leftover skillet cornbread, delicata squash, bacon, fresh sage, kale and blackeyed peas.

This salad is great warm or at room temperature, so don't worry if the ingredients aren't ready at the same time. 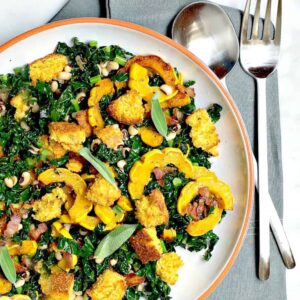 A quarter round of my skillet cornbread is just the right amount for this salad, but you can use any cornbread recipe you like.