Fattoush is a Lebanese salad of crisp lettuce, crunchy vegetables, toasted bites of pita bread and a tangy sumac dressing! A perfect way to use leftover pita bread, this fattoush salad recipe comes together in minutes and is hearty enough to be a meal on its own.

You may have noticed that I have a thing for bread salads, like this Caesar Salad with a giant crouton, this reinvention of a muffuletta sandwich as a salad or this cornbread salad. So when we had leftover pita bread (made with this easy pita bread recipe) it made perfect sense to add a Mediterranean version: Fattoush!

What is fattoush salad made of?

Fattoush salads have a nearly endless list of possible ingredients from radishes and romaine to purslane, parsley leaves, and pomegranate seeds! You can also add green onions, a sprinkle of feta or za’atar, or a handful of black or green olives. Go with what looks best at your grocery store or farmer’s market. In my mind, there are only two rules: get your torn bits of pita nicely toasted so you get that delicious crunch in every bite (you can use pita chips in a pinch), and don’t skip the sumac in your dressing – there’s no other spice quite like it! And speaking of sumac…

Sumac spice is made by grinding the berries of a sumac bush into a coarse powder and has a flavor somewhere between tangy citrus and delicately floral. You might be tempted to try a substitution if you don't keep ground sumac in your spice cabinet, but I hope you won't. It has a distinct flavor that's worth seeking out.

How to make Fattoush Salad:

Step 1: Toss torn pita bread in olive oil and season with salt. toast in a single layer at 350˚F on a baking sheet until crisp. 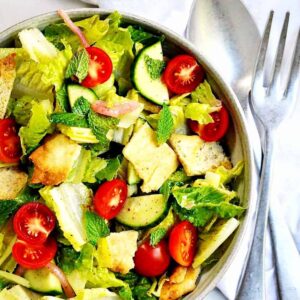