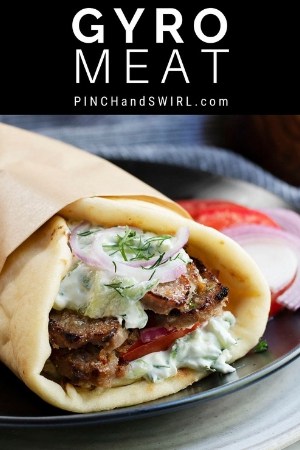 It is. With just a handful of ingredients and a clever method, it's easy to make delectable, homemade gyro meat. (See my recipe video below - with more than 150,000 views on YouTube - to see the exact process.)

I came across this recipe from Serious Eats', J. Kenji Lopez-Alt, who had tried and been disappointed with the same complicated recipe I followed on my first try. Applying the scientific approach he's famous for, he simplified the process while improving the outcome. He found that adding some fat (in the form of bacon), along with salting and chilling the meat mixture ahead of pureeing and baking, produced a reliably superior gyro meat, both in texture and flavor.

I admit my skepticism about free forming the meat puree into a rectangle on a baking sheet instead of pressing it into a loaf pan, imagining it disintegrating into a bubbly mess. But it holds together beautifully. He also added the clever step of broiling thin slices of the baked loaf to warm and crisp the edges. Not only does this add to the flavor and texture of the gyro meat, it transforms any leftovers into a 5 minute meal in the refrigerator just waiting for assembly.

Tips for the Best Texture and Flavor

Though I stuck with Kenji's basic technique, I did make a few changes. I finely chopped the garlic and onion in the food processor before adding the meat mixture and bacon to avoid any chunks of onion in the finished meat. I also increased the amount of oregano and added a little cumin for flavor depth. And, because I love Tzatziki sauce on my gyros, I slathered it on instead of the yogurt and mayonnaise based sauce he suggests.

In my recipe testing, the gyro meat consistently took 35 minutes to reach 155˚F with an instant read thermometer (instead of the 30 minutes directed in the original recipe), but that could be a difference in ovens, so I've offered a range.

What is gyro meat made of?

It is typically made with ground lamb and/or ground beef (and sometimes chicken), onion, garlic, oregano, and other spices. This recipe adds bacon for texture and flavor and uses a convenient, but non-traditional cooking method.

How do you pronounce gyro?

How to Make a Gyro

Combine ground lamb with salt and spices in a medium bowl. Cover and refrigerate 1 hour.

Preheat oven to 300˚F. With moist hands, shape meat mixture into a 8-inch long by 5-inch wide rectangle on a foil lined baking sheet. Bake for 30-35 minutes until center registers 155˚F on an instant read thermometer. Remove from oven and let rest 15 minutes before slicing.

Preheat broiler with oven rack adjusted to highest level. Slice loaf crosswise into ⅛-inch thick slices and arrange in a single layer on foil lined baking sheet. Broil 2 minutes until edges are crispy. Remove from oven and tent with foil. 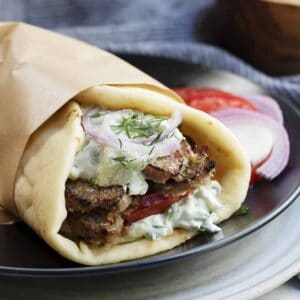