Mini Pumpkin Pies are the perfect individual dessert for the holidays! And these aren't just any mini pumpkin pies, they're baked in mini pumpkins with a tender flaky crust on top!

One thing led to another.

The idea to make these mini pumpkin pies started with a friend's birthday party, Barb and her once-a-year soup where the pumpkin is the tureen.

You may remember my riff on the recipe as individual Savory Bread Pudding Pumpkin tureens.

The inspiration kept coming: Molly made a pumpkin into a terrarium and Victoria turned one pumpkin into a lantern and baked a cake inside another and of course you can't go wrong with Pumpkin Chiffon Pie, particularly when there's a Gingersnap Crust involved using homemade Gingersnap Cookies.

Then I realized that I'd never seen a mini pumpkin pie - in a pumpkin, that is. And why not?

Why not, indeed. I made them and you know what? They are amazing.

How to Make Mini Pumpkin Pies:

Step 1: You start with mini-pumpkins.

Step 2: You cut off the tops, scoop out the seeds, and fill them just as you would a crust if you were making a pumpkin pie.

Step 3: When you've baked them until the filling is beginning to set and the squash is nearly tender, you top them with crust and bake them some more.

Then, if you're me, it dawns on you that you have 6 mini pies and just 2 people who live in the house - a dangerous combination. But then you realize that you have friends who live across the street who might like pie.

Jeff wasn't home, so he may or may not have tried these. But Lucy, Parker and Matthew approved. 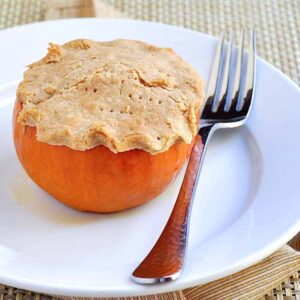