Pumpkin Chiffon Pie is a fluffy, creamy gently spiced pumpkin filling mounded into a buttery gingersnap crust. Because it sets up in your refrigerator, it requires just 5 minutes of baking time total for the crust and can be made a day in advance. So convenient for your holiday menu and a dessert that everyone at your table will love.

When you think of the word 'chiffon,' you might think of fabric that's delicate and feather light. Those words are exactly how you would describe this classic dessert. It's similar to a traditional pumpkin pie, but instead of a pudding-like texture, the filling has a creamy, light texture that's reminiscent of mousse. In a spiced crust made with gingersnaps, butter and a whisper of cinnamon, it's a slice that no one can resist. Try it once, and I predict it will be a new family favorite.

How is chiffon pie different from mousse or cream pie?

Both are light and airy, the main difference is that chiffon pies have meringue (whipped egg whites and sugar) folded in instead of whipped cream.

How to Make Pumpkin Chiffon Pie

Press crumb mixture evenly onto the bottom and sides of a 9-inch deep-dish pie pan (a dry measuring cup makes this easier). Bake 5 minutes in a 350˚F preheated oven. Set aside to cool.

Meanwhile, dissolve gelatin in ¼ cup of cold water; set aside.

Combine egg yolks, ¼ cup of the sugar, pumpkin, milk, cinnamon, nutmeg and salt in a medium saucepan and cook and stir over medium heat until thickened. Stir in softened gelatin and transfer to a large mixing bowl. 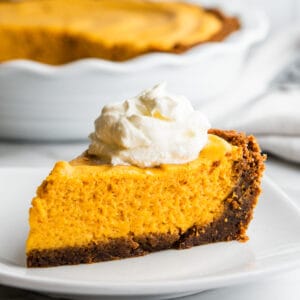