I’ve introduced you to Keith’s parents before, but I’ve never told you about his grandmother, Maxine. I first met her the year that Keith and I started dating, more than twenty-five years ago. When I think of her, I still see the way she always greeted me: her face would light up in a big smile and she’d say, “hiii…,” the word stretched out in her sweet southern drawl.

She and her husband raised two sons, Edwin and Bob, in Memphis, Tennessee. Both sons settled in the west, one in Oregon, the other in California. As a young woman Maxine worked as a teacher’s aid, but after the untimely death of her husband, she decided to become a teacher herself.

Until her late eighties, she lived alone in her Memphis home where she was active in her church and sewing club, travelled internationally and drove a VW Bug that would act up occasionally. But not to worry, her neighbor had shown her how to pry just the right place open with a spoon to make it roar to life.

Each year during the winter holiday season, she would fly to the west for a month. (Once, she so charmed the man sitting next to her on the plane that he sent a Virginia ham to meet her at her destination.) On these visits, she divided her time between her son’s homes, an event that her four grandchildren especially looked forward to. She would fill her days making sugar cookies, rolls and pies - always happy to spare a bite of dough or make a batch of cinnamon sugar crisps from pie crust scraps. And in the evening, you might find her knitting hats for the homeless people of Memphis.

There are at least two of Grandma’s recipes that are essential at every Stevens family holiday meal: Grandma’s Rolls and Chocolate Rum Pie.

If you’ve ever had chocolate and rum together, you know they’re a heavenly match. But think of adding lightly sweetened whipped cream and a delicate, flaky Lard Pie Crust (or Gingersnap Crust that I also make for Pumpkin Chiffon Pie) and you’ll know why this recipe is a Stevens family heirloom. An heirloom that I’ve been given permission to share.

What about Grandma’s rolls? I haven’t worked up the courage to ask about sharing that recipe yet. Maybe next year.

More of My Favorite Southern Recipes 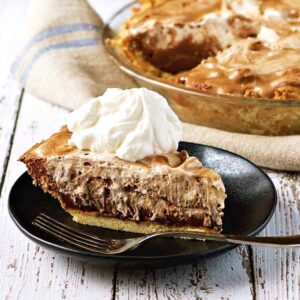 A fully baked Lard Pie Crust is the perfect savory / sweet match for this pie.

Calories: 486kcalCarbohydrates: 37gProtein: 5gFat: 32gSaturated Fat: 19gCholesterol: 134mgSodium: 55mgPotassium: 229mgFiber: 1gSugar: 31gVitamin A: 1000IUVitamin C: 0.3mgCalcium: 93mgIron: 1.5mg
Tried this recipe?I'd love to see it! Tag me on Instagram at @pinchandswirl or leave me a comment and rating below.