Once I discovered that a Lard Pie Crust is the flakiest, most flavorful crust there is, I've never looked back. A blend of rendered pork lard and high fat butter unite to create a rich, flavorful crust that accentuates both savory and sweet pies.

When I say 'lard,' I don't mean the highly processed, hydrogenated lard you'll find lurking on grocery store shelves. Fortunately, excellent quality rendered leaf lard is available online and likely from your local butcher and/or farmers market or specialty grocery store. It's worth seeking out to make this fluffy, flaky, delicately porky and delectable pie crust.

What is leaf lard?

Leaf lard is the highest grade of lard rendered from visceral fat surrounding pig kidneys. It has a very neutral flavor (very little pork flavor) which makes it ideal for pie crusts and baking in general as it makes a great non-hydrogenated alternative to shortening.

Pie crusts made with lard are flaky and crisp, while all-butter crusts have rich flavor and tenderness. Lard has a higher melting point than butter, making pastry easier to work with. Butter's lower melting point absorbs more quickly into flour requiring colder pastry and quick work to retain flakiness. The best pie crust recipe: flaky, crisp, tender and flavorful, uses a blend of both lard and butter.

Can you substitute lard for butter in pie crust?

Yes, you can substitute lard for butter in pie crust. For the best flavor use a mixture of both, replacing up to half of the butter with lard to increase flakiness and retain a buttery flavor.

What does lard do in pastry?

Pastry made with lard is flaky and crisp, but is less flavorful than pastry made with butter. For a flaky pie crust that's also flavorful, use a blend of lard and butter.

Is Crisco the same as lard?

Crisco is not the same as lard. Lard is rendered pork fat while Crisco is a brand of shortening in the United States that has come to be synonymous with the food product, 'shortening'. It is made by hydrogenating vegetable oil.

Which is better Crisco or lard?

It's a matter of opinion, but in mine, if the lard is not highly processed, e.g., simply rendered pork fat, lard is better than Crisco in every way.

But it's wonderful for sweet pies too. With exceptional flavor depth, it heightens sweet and nutty flavors far more than your average homemade pie crust. (Think: Chocolate Rum Pie, Strawberry Pie, Apple Pie, Peach Pie, Pumpkin Pie or Pumpkin Chiffon Pie - also good with Gingersnap Crust, Pecan Pie.) If you've ever had candied bacon or bacon crumbled into a cookie or tossed into caramel corn, you know the kind of decadent deliciousness I'm talking about.

Instructions below on how to blind bake (pre-bake partially or fully) this lard pie crust depending on how you plan to fill it.

Refrigerate this pie crust for up to 3 days before rolling out. Or wrap and freeze for up to 3 months. Defrost overnight in the refrigerator before baking.

How to Make Lard Pie Crust

Pulse flour and salt in the bowl of a food processor. (See recipe card for by-hand instructions.) Add lard and butter and pulse until mixture resembles coarse crumbs with some pieces a little larger than peas. Sprinkle cold water into flour mixture a tablespoon at a time, pulsing after each addition until mixture clumps together when pinched.

Transfer pie dough to floured surface and shape into a disc. Wrap with plastic wrap and chill in refrigerator for one hour or more.

Place cool, but pliable dough on a floured work surface. Sprinkle dough with flour and roll from the center out to all edges into a 12-inch round. Carefully transfer dough to pie pan and ease into place, taking care not to stretch it. Trim edges leaving a 1-inch overhang. Flute edges using the thumb of of one hand and the index finger of the other into U or V shapes. Cover and refrigerate at least 30 minutes. 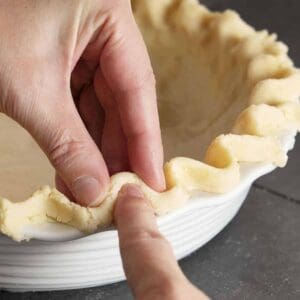 To Make With a Food Processor:

To Make by Hand:

To Roll Out Pie Crust:

How to Blind Bake or Fully Bake Pie Crust