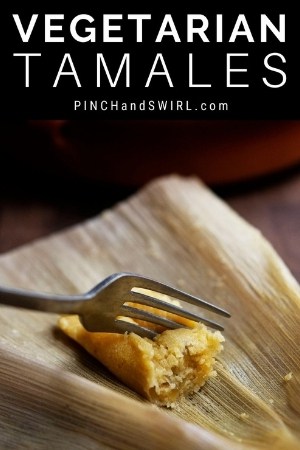 These Vegetarian Tamales with green chiles and cheese are my absolute favorite flavor of homemade tamale! Impossibly tender with creamy jack cheese, smoky green chiles and the sweetness of fresh corn in every bite, they're irresistible! Fresh tamales are fun to assemble and freeze beautifully too.

The first tamales I had were about the size of cigars, wrapped in something like parchment paper and pulled from a can. My mom wasn't one for drive-thru eating, so this was her style of fast food. Sometimes, on a lazy evening, we would heat them in the oven with shredded cheddar over the top and call it dinner.

Then, a little more than a decade ago I tried a traditionally made tamale, wrapped in a corn husk and steamed. As you've guessed, it was not at all like what we'd eaten from a can. Since then I've had it in mind to try making homemade tamales. But those little corn husk packets looked so fancy, so exotic. I assumed it would be an all day ordeal.

Then a couple of weeks ago a friend loaned me The Kingston Hotel Cafe Cookbook, and I spotted a recipe for vegetarian tamales. It was finally time to give it a try. After a few attempts and some changes to the amounts and method, I ended up with just the kind of tamale I was after.

I still think tamales look exotic, but I'm happy to tell you that they're less difficult than they appear and are completely worth the effort.

Can you make tamales without the corn husk?

You'll need a wrapper of some sort to wrap around the tamale dough before steaming to keep it together. Corn husks (fresh or water-soaked dried husks), banana leaves, and parchment paper are all used as tamale wrappers.

Lard is the traditional fat used for tamales, but they can be made with butter to make a vegetarian masa for tamales or shortening (ideally non-hydrogenated) or vegetable oil to make vegan tamales.

What is the best vegetarian substitute for lard?

For flavor and consistency, butter is the best vegetarian substitute for lard.

How to Make Vegetarian Tamales

Step 2: Meanwhile beat butter until light and fluffy in a stand mixer fitted with the paddle attachment (about 5 minutes).

Step 3: To make the masa dough, whisk together masa harina, salt, baking powder and cumin in a medium mixing bowl. Add milk and corn to a blender pitcher and blend until smooth. Pour milk mixture over masa harina mixture and stir well to combine.

Step 4: In three additions, add masa mixture to butter, mixing between each addition. Increase speed to high and mix until light and fluffy, about 8 minutes. Test dough by placing a teaspoon of it into cool water. If it floats, it's ready. Otherwise continue to mix. Add cheese and green chiles and mix on high 2 minutes more.

Step 4: Scoop ¼ up of tamale dough into center of soaked corn husk. Spread in an even layer ¼ to ½ inch thick with spoon, fingers, or by folding one side of the husk over and flattening. Wrap one long side over filling then fold the other side over to overlap the first. Fold the bottom up and wrap with a strip of corn husk to seal. Repeat with remaining corn husks.

Step 5: Place tamales vertically in a stockpot steamer steamer basket set over boiling water, open side up. Cover and steam 1 hour and 45 minutes to 2 hours (add more water as needed to be sure it doesn't boil dry). To test tamales for doneness remove one from steamer and let stand 3 minutes. Pull the husk away - if it sticks, continue steaming. If the husk comes away cleanly, the tamale is done. Serve hot.

We ate these Vegetarian Tamales with Green Chiles and Cheese straight from the husks without any sauce. They're rich and full of flavor as is, but they would also be wonderful heaped with Pico de Gallo and sour cream. 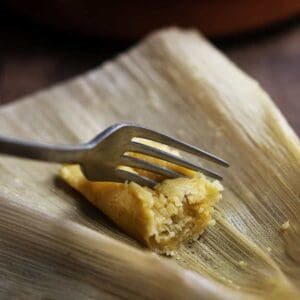