This Preserved Lemons recipe has just two ingredients: lemons and salt. Most people think of North African and South Asian cuisine, like Morrocan tagines, when they think of preserved lemons (also called lemon pickles). But they can be used in so many dishes from soups and salads to marinades and dressings – that magic touch of tangy salt that can make a meal extraordinary. With 10 minutes, lemons and salt, you can make a big batch of these to enjoy for months.

In doing some research for this post, I came across the Wikipedia page for Preserved Lemons and was surprised to learn that they were called for in some early 19th century English language cookbooks. The page included this recipe from A New System of Domestic Cookery, a cookbook by Maria Eliza Rundell, first published in 1806:

They should be small, and with thick rinds: rub them with a piece of flannel; then slit them half down in four quarters, but not through to the pulp; fill the slits with salt hard pressed in, set them upright in a pan for four or five days, until the salt melts; turn them thrice a day in their own liquor, until tender; make enough pickle to cover them, of rape-vinegar, the brine of the lemons, Jamaica pepper, and ginger; boil and skim it; when cold, put it to the lemons, with two ounces of mustard-seed, and two cloves of garlic to six lemons. When the lemons are used, the pickle will be useful in fish or other sauces.

Even though I prefer a super-simple version of preserved lemons, just lemons and salt, I agree with Ms. Rundell that ‘the pickle’ is useful for many things!

Beyond the traditional recipes that call for preserved lemons, I love to chop them up and toss in to soups, pastas and risottos or smatter them over fish or chicken. You may remember my Kale Salad with Tomatoes Bacon and Preserved Lemon Dressing – the one that tastes exactly like a BLT? That recipe is all about the preserved lemon. The brine is also useful, add a little of it the next time you make a Bloody Mary and you’ll see what I mean.

I’ve tried several recipes for making preserved lemons and this is my favorite – entirely reliable and made with just two ingredients and a few minutes. Watch the recipe video below to see how simple they are to make!

How to Make Preserved Lemons

1. Cut ends off of lemons and cut from one end in quarters, leaving bottom section in tact.

2. Scoop kosher salt into the center of each lemon and transfer to clean quart jar. Repeat with remaining lemons, pressing them firmly into the jar. Cover and let stand in a cool, dark plate overnight at room temperature.

3. The next day, press lemons down to compress and cover with additional kosher salt. Transfer to refrigerator for one month, pressing lemons down occasionally to keep submerged in brine. 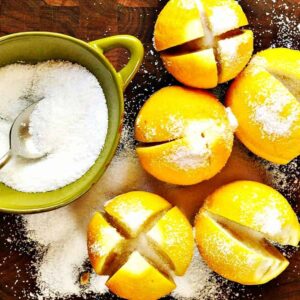 Refrigerator life recommendation based on this recipe and this one.