Spending 65 days in Italy sounds like a lot, and it was. It was wonderful, most of the time. But sometimes it overwhelmed and exhausted us.

We blogged about our adventures nearly every day and, being so far from home, always appreciated comments from friends and family. But one of our most faithful commenters - one that often popped in with encouragement and suggestions along the way - was, at the time, a complete stranger. He went by 'Colo,' and later we learned his name was Tom.

We've stayed friends since then and I have him to thank for this recipe.

Until Tom told me about it, I hadn't heard of the cookbook compiled by Morgan Freeman and some other celebrities to raise money for 2004 hurricane victims in Grenada. The book is called, Morgan Freeman and Friends: Caribbean Cooking for a Cause. The recipe for this salad was Ben Affleck's contribution and about it Tom said, "A flavor explosion awaits."

I ordered the book immediately.

As usual, Tom was right.

It's the first salad I've ever made that has no oil, and not even salt or pepper! Strangely, the salad doesn't need them and could distract from the intensity of the other flavors, just as with Shrimp Salad, Bacon Wrapped Shrimp, Bacon Wrapped Scallops, Crab Cakes, Crab Salad and Shrimp Tacos enhancing flavors are all that's needed.

For your sage advice on food and travel, we'll always be grateful to you dear Tom! 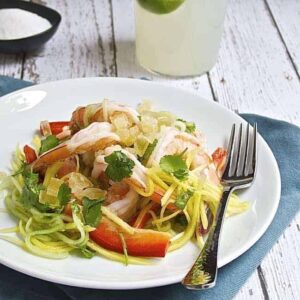 Marissa Stevens
Lightly adapted from Morgan Freeman and Friends: Caribbean Cooking for a Cause. This recipe makes far more dressing than you'll need for one salad. It's delicious on any sort of green, seafood or even fruit salad and (according to the cookbook) will last up to a month!
Save Recipe Saved! Print Recipe Pin Recipe
Prep Time 15 mins
Total Time 15 mins
Course Salad
Servings 2 people
Calories 519 kcal

To make the Dressing:

To make the Salad: