When I say that these Twice Baked Potatoes are 'piled high,' I mean it. An extra potato beyond those that you're stuffing makes sure of it.

Overstuffed, but lightened up.

The difference? Instead of hollowing out the whole potato, I cut two of the potatoes in half lengthwise, then scoop out the pulp and combine it with all of the pulp from the third potato. Mix the pulp with all of the goodies and then pile it into the potato halves. Voila! Overstuffed, but not so huge that you're too full to eat anything else.

These are always a big hit at dinner parties (I even make a miniature version) and are perfect for date night!

How to Make Twice Baked Potatoes

Step 1: To serve 4 people, rub 3 scrubbed and dried baking potatoes with oil and season with salt and pepper. Bake at 400˚F until tender.

Step 2: Cut 2 of the potatoes in half lengthwise and scoop all but ¼ inch of the pulp into a large bowl; transfer potato halves to baking sheet. Peel remaining potato and add pulp to bowl. With a handheld masher, mash pulp with butter, salt and pepper until smooth. Add cheese, sour cream and chives and mash until smooth. Divide potato pulp mixture into potato halves; top with more cheddar cheese and bake until filling is hot and cheese is melted. Serve hot topped with sour cream and chives. 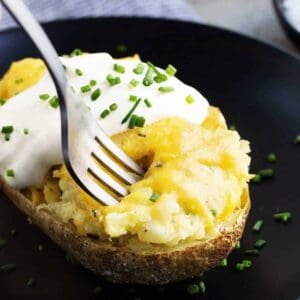