Kale salad has gotten a lot of attention over the past several years. But what comes to mind when you think of a ‘Brussels sprouts salad’? Do you perk up or do you cringe? The first few times I ate them, honestly, I thought they were gross. They were squeaky, water logged mini cabbages with a faintly skunky smell.

But then I tried them in a few new recipes. Thinly sliced and sautéed in olive oil with garlic: delicious. Roasted with delicata squash and crispy bits of bacon: even better. But now I think I’ve discovered my favorite way to eat them – raw.

Our CSA share last week had tight, brilliantly green Brussels sprouts and a large bunch of Lacinato kale (also called Italian or Tuscan kale). I immediately thought of a salad recipe I’d seen in Bon Appétit magazine several years ago – it stuck in my mind because it’s uncommon to see Brussels sprouts and kale served raw.

The key to this Kale and Brussels Sprout Salad is to slice the kale and Brussels sprouts into tiny ribbons, really more like coleslaw than salad. (The food processor makes quick work of this.) The tangy lemon Dijon vinaigrette clings to every shred and balances the boldly flavored greens. Toasted almond chunks and shreds of pecorino cheese make the salad feel indulgent.

Keith commented that he’d choose this over a Caesar salad (though we do love our Kale Caesar Salad) any-day, and he loves Caesar Salad. Maybe you’ll agree.

What to serve with Kale and Brussels Sprout Salad

Serve this salad as a light meal on its own or as a side dish with: Turkey Meatloaf or a hot bowl of Tomato Bisque or Vegan Butternut Squash Soup!

How to Make Kale and Brussels Sprout Salad

Step 1: Whisk dressing ingredients together in the bottom of a large salad bowl. 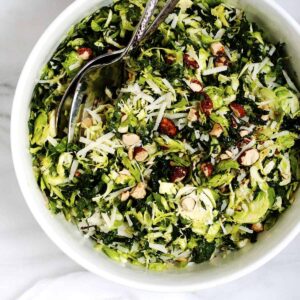