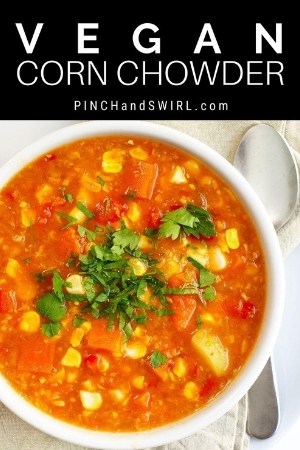 As soon as fresh corn hits the market, I start thinking about this Vegan Corn Chowder. It's something I make all year long with frozen corn, but fresh kernels cut from the cob add a special, sweet pop. A complex blend of textures and sweet, spicy, smoky flavors, it's comfort food that everyone loves.

This chowder began with a recipe in Real Simple magazine that I clipped ages ago. Over the years it has evolved into a vegan version that I much prefer: skipping the cream in the original as it’s better without it, and using chipotle hot pepper sauce instead of canned chipotle chiles that can be blisteringly hot. I’ve also found that adding Yukon Gold along with sweet potatoes balances the chowder's sweetness.

Though this savory chowder is vegan (and naturally gluten free), you don't have to compromise on flavor or heft. Smoked paprika lends a smoky rich decadence that's not just vegan, but much lighter than the bacon that's often called for in chowders. And with corn, sweet red bell pepper, and two varieties of potato the chowder is quite filling, but light in calories (about 200 per generous bowl). Just the kind of thing you want to be eating when you have bathing suit season in mind or slinking into a holiday dress.

How to Make Cashew Cream

To make Cashew Cream: soak 1 cup raw cashews in enough water to cover for at least 1 hour and up to 24 hours. Drain cashew water and add cashews to a blender pitcher. Add enough fresh water to cover by 1 inch and blend until smooth.

How to Make Vegan Corn Chowder

Step 1: In a large soup pot over medium heat, cook onion and red pepper in olive oil until tender.

Step 2: Add sweet potatoes, Yukon Gold potatoes, vegetable broth, smoked paprika, and chipotle hot sauce and bring to boil. Reduce heat; cover and simmer until potatoes are tender, about 15 minutes. Optional: To thicken chowder, blend a small portion or all in batches with a standard or immersion blender.

Step 3: Add corn and season to taste with salt and pepper. Stir until heated through; serve.