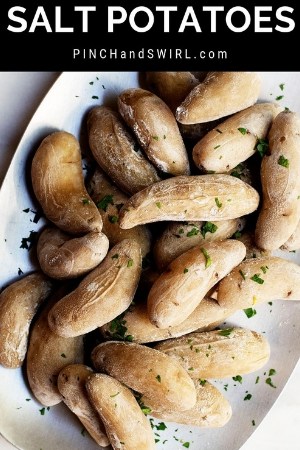 I spotted these Salt Potatoes at a friend's party several weeks ago. What caught my eye was the visible salt crust coating the cute crescent moon shape of fingerling potatoes. And then I had a bite! Crackly, crisp skin gave way to a hot, creamy center - all the qualities I look for in a perfect french fry, but without a bit of oil. I had to have the recipe.

I imagine some distracted cook letting potatoes boil away, then a moment of realization and panic hits: "I forgot the potatoes!" Only to discover a dry pan of pristine potatoes clothed in crispy skin with a fine as fairy dust salt crust. Thank goodness for happy accidents!

Her salt potatoes recipe came from a cookbook called Spanish Flavors by José Pizarro. But I've since discovered that these are a favorite in the US too.

I grew up on the west coast of the US. If I'd grown up on the east coast, specifically in Central New York, these would have been familiar. Apparently "Syracuse Potatoes" are a summer staple at family get togethers and fairs when potatoes are first harvested.

The main differences between José's recipe and traditional Syracuse potatoes are: the style of potato he suggests (fingerling instead of young, white potatoes), that his are boiled dry (Syracuse potatoes are boiled until tender and strained), and that he calls for a lot less salt. The traditional recipe for Syracuse Potatoes calls for a whopping one cup of salt to six cups of water. José's recipe calls for 2 tablespoons of flaky sea salt to a quart of water and, after testing the recipe several times, I prefer even less.

Get the salt just right.

A heaping tablespoon of flaky sea salt per quart of water coats each potato in a thin, sharply salty crust. Perfect. Any more than that creates a thicker, too-salty crust that I found myself aggressively brushing away.

For the majority of the 30 minutes or so that it takes for these potatoes to boil dry, you can busy yourself with other things. But when the water is nearly gone, you'll need to watch vigilantly until the last sign of water evaporates. Then you'll turn the heat to low and give the potatoes a few gentle turns to fully dry the skin and set the salty crust.

Salt potatoes are wonderful on their own and even better with something delicious for dipping. You have endless options! Melted butter is the dip of choice in Syracuse and José includes a recipe for Cilantro Mojo (what my friend served): wonderful, but dangerous for people who have a knack for dribbling drippy dips down their shirts at parties. (ahem) I prefer serving these with a thick dip like Garlic Aioli or a version of it like Pesto Aioli (equal parts aioli and pesto - classic pesto or Almond Pesto) or Sriracha Aioli (aioli made with a generous dose of sriracha sauce).

More of My favorite Potato Recipes

How to Make Salt Potatoes

Step 1: Cover a single layer of fingerling potatoes in a wide, shallow pan. Cover with cold water and sprinkle with salt.

Step 2: Bring to boil; allow to rapidly boil until water has evaporated.

Step 3: Reduce heat to low and gently turn potatoes until their skin is completely dry. Transfer to platter and serve. 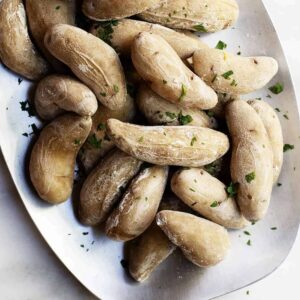 Marissa Stevens
Who knew that just potatoes, salt, and water could create such a delicious dish! Fingerling potatoes get buttery smooth on the inside with a crisp, salty crust on the outside to make an addictive appetizer!
5 from 14 votes
Save Recipe Saved! Print Recipe Pin Recipe
Prep Time 5 mins
Cook Time 30 mins
Course Appetizer, Side Dish
Cuisine American, Mediterranean
Servings 6 people
Calories 116 kcal