Apple Crostini with Fig Jam and Pecorino are a party pleasing appetizer! With just a few simple ingredients you can find at your local grocery store, you'll have these made and served in minutes.

Just slather fig jam onto crisp crostini then stack high with thin apple slices and delicate shavings of pecorino cheese and serve. So easy and so good!

For parties, I love to offer a variety of crostini. With a typical baguette you can make 24 crostini, so why not make a variety? Click here for a whole collection of crostini recipes. 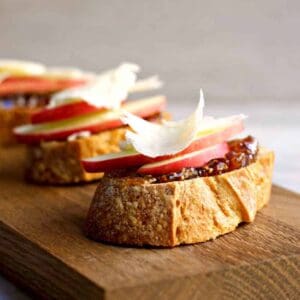